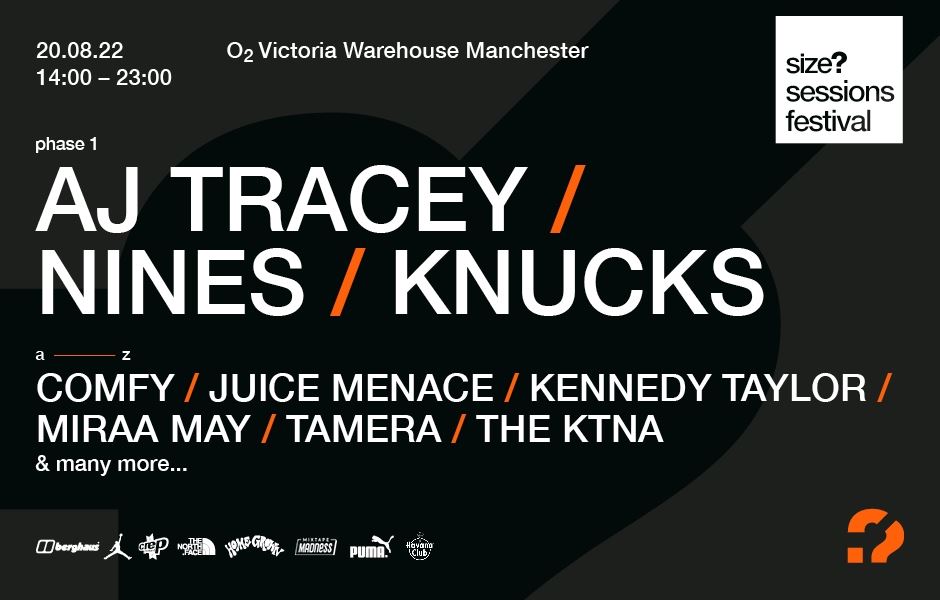 Street-fashion & footwear retailer size? are kicking off Summer 2022 with the launch of their very own size?sessions music festival.

Designed to connect the culture of music and fashion, size?sessions allows the size? community to experience performances from a wide range of global and locally recognised artists, with the first wave of acts now announced! AJ Tracey, Nines, Knucks and, Comfy, Juice Menace,  Kennedy Taylor, Miraa May,Tamera and The KTNA and joining across 3 stages.

Taking place in their home city of Manchester, the size?sessions festival will be held on Saturday 20th August at O2 Victoria Warehouse, Manchester - a city renowned for its music and fashion culture, Manchester is the perfect hub to unite streetwear and music fans.

To make sure music fans bag their tickets, tickets will go on presale to size?access members at 10am on Wed 22 June 2022 via www.size.co.uk/page/size-sessions-festival/, followed by general sale on Friday 24th June 2022

First debuting as an intimate in-store only experience, size?sessions continues to grow, welcoming an array of talent from a diverse range of genres. Over the years, size? have continued to represent up and coming talent, while paying homage to the greats of music that are synonymous with size?.

Festival goers will not only be able to witness some of their favourite acts, attendees can also socialise and document their time at the festival via the Homegrown room, a social space sponsored by newly launched fashion brand Homegrown.

AJ TRACEY:  AJ Tracey is on an unstoppable, independently-built trajectory. April 2021 marked the release of his highly anticipated second album “Flu Game”. In typical AJ style, “Flu Game” highlights AJ’s incredible breadth of vision in taking on drill, garage, afrobeats, and more in one masterful swoop, proving that the versatility showcased across ubiquitous hits “Ladbroke Grove”, “Thiago Silva” and “Rain” is now a honed superpower here to stay. AJ has made massive wins in the face of adversities, and his last year was no different. In what is now his biggest year to date, AJ had the most top 5 singles of any British artist in 2020, picked up multiple BRIT nominations, an Ivor Novello Songwriter of the Year nod, and spent the summer of 2021 co-headlining some of the most renowned festivals in the country, from Reading to Wireless.

NINES:  Born and bred in the Church Road estate to Jamaican parents, everything about Nines – one of the UK’s most fabled and important rappers of recent years – feels intrinsically linked to the streets he’s grown up in; every verse on every on track on every mixtape, CD, album he’s ever released is a product of his environment. Starting off with underground mixtape ‘from Church Road to Hollywood’,to progressing sonically to critically-acclaimed debut album ‘One Foot Out’ – a natural extension of the ground covered on 2015’s ‘One Foot In’ – via XL in 2017, to his most recent offering with Warner , ‘Crabs in a Bucket,’ Nines is set to release another album in 22 and crowds hotly await his return.

KNUCKS: Hailing from South Kilburn [London, UK], Knucks continues to set the tone for his distinctive sound and music ability. Recently hitting Number 3 in the charts with his album ‘ALPHA PLACE’, this marked the rappers first ever appearance in the UK charts too. Praised by the likes of Wretch 32, Stormzy Novelist, Kenny Beats to just name a few, the rising rapper is certainly on his way to cement his name in the world of innovative music. At the tender age of 12, he began to grow a strong interest in music, his musical influences are rap legends from the likes of Curren$y, MF Doom, Sade and Nas.