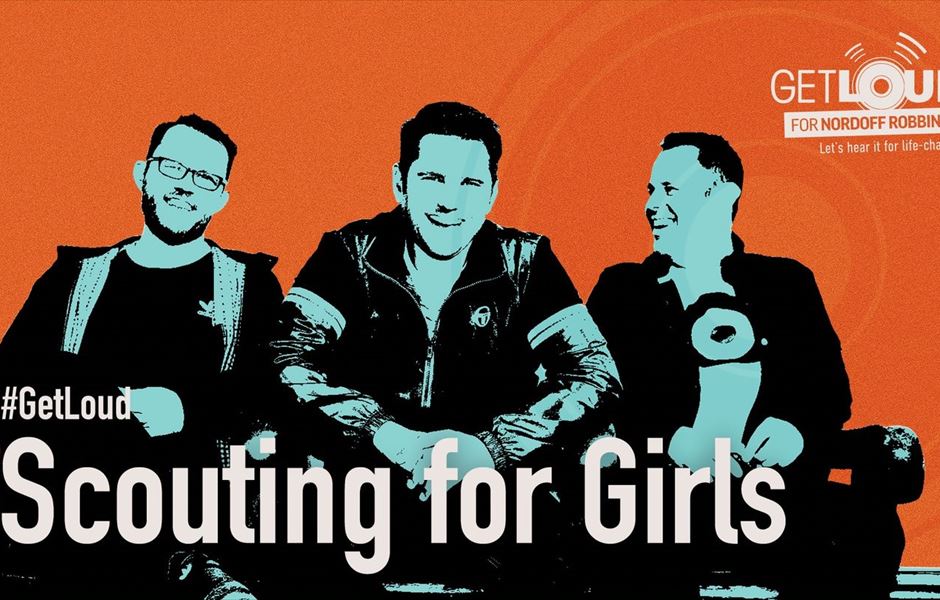 Nordoff Robbins, the UK’s largest independent music therapy charity, is proud to announce the return of their groundbreaking Get Loud campaign - bringing incredible artists to venues up and down the UK on one very special night.

After a phenomenal year in 2018 which saw the likes of Everything Everything, All Saints, Enter Shikari, The Darkness, Nina Nesbitt and more play unforgettable shows, 2019 sees Nordoff Robbins take things up a level - with Get Loud bringing more shows across the UK than ever before for an evening unlike any other in the musical calendar.

Taking place on Wednesday 25 September, Get Loud 2019 will present 12 celebrated UK artists performing at the same time in 12 intimate venues around the UK. The eclectic mix of artists performing this year are helping Nordoff Robbins celebrate the incredible diversity of their charity, as they reach out to anyone and everyone who can be helped by music therapy.

Tickets for the individual 'Get Loud Sessions' will cost £10 and go on sale via GetLoud.org.uk with all the proceeds going directly to the charity. The campaign aims to raise awareness of the incredible work Nordoff Robbins does to use the power of music to enrich the lives of those affected by life-limiting illness, disability or isolation.

Bringing the pop magic to London are three undeniable pop party-starters. Louise Redknapp stands as one of the most well-known figures in British pop over the past two decades, emerging from her early days as a part of Eternal, and now returning to the pop world with a hotly anticipated new album later this year. Taking over London’s Omeara for an unmissable intimate show, it’s sure to be a must-see moment. One of the most important voices in modern pop, MNEK will be bringing his undeniable showmanship to XOYO for an intimate club-spectacle destined to shake down the streets of Shoreditch, while in Harrow - ‘She’s So Lovely’ hitmakers Scouting For Girls play one of the smallest shows of their entire career at Trinity, bringing an arsenal of singalong favourites to their fans.

Louise Redknapp says; “I am thrilled to be part of the 2019 Get Loud line-up. Having recently come back to my own music, I know how cathartic that experience of reconnection has been, so to support a charity which uses music to connect with people facing so many challenges in life, is really important to me”

MNEK says; “It’s really exciting to be part of this year’s Get Loud campaign with Nordoff Robbins. It’s not everyday you get to feature on such a diverse bill! Diversity is so key, and Nordoff Robbins embrace that every day. Their beneficiaries are so diverse just like the music they make with each of them. It’s all about the personal journey with music and what it can do for you on a profound and deep level. That is what this charities work is all about and exactly why I’m honoured to be involved in this year’s campaign.”

Scouting For Girls said; “We're so excited to play at the Trinity in Harrow again. It really is where it all started for Scouting for Girls - We grew up round the corner and went to the indie disco on the weekend. When we started the band we played there, and only there, every month for about a year (it was our Hamburg!) We started with about 30 of our mates and by the end of the year we were selling it out with queues down the road, and Greg’s mum taking the money on the door! Since getting a record deal we've been back a few times but have never done a proper show until now! It's with enormous pleasure that we'll be going back to The Trinity in aid of Nordoff Robbins. The work Nordoff Robbins does is truly admirable. Music is all about making connections – as a band we pride ourselves on getting the crowd involved as much as possible when we perform, so we know how that feels to really connect with people through music. This charity take that connection leaps and bounds further in music therapy and that is something special. We can’t wait to host our Get Loud gig in celebration of that in September!”

Packing into Portsmouth’s famed Wedgewood Rooms, modern bard Frank Turner will be serving up his earnest folk-punk for a storied set from one of the UK’s most beloved cult songwriters, while superstar pop producer extraordinaire Sigala will be lighting up the night in Liverpool - as he takes over The Loft at Liverpool Arts Club with his array of chart-smashing favourites.

Over in Glasgow, popular comedian Al Murray’s band Fat Cops, which counts husband of JK Rowling, Neil Murray as a member, will be serving up some punk-glam chaos, while in Birmingham, the visceral words Akala will be taking over the Hare And Hounds for a spanning set from one of the UK’s most influential wordsmiths.

Frank Turner says; "My visit to Nordoff Robbins earlier this year, to attend a session with some autistic beneficiaries, was both eye-opening and moving; to see real, tangible progress being made, in real time, for people who really need it, was a unique experience for me. They have my full support, and I look forward to doing more with them."

Sigala says; “On a personal level, I really want my music to have an impact on people – maybe if someone’s feeling down they’ll listen to one of my songs and it might cheer them up, and that’s a really powerful element to have in a song. So I am proud to be part of the Nordoff Robbins Get Loud 2019 campaign, it’s great to be supporting a charity whose focus is to also make positive changes to people’s lives through music”

Akala says; “It’s a real honour to be supporting Nordoff Robbins through this campaign. Get Loud sends a strong message about music - we all listen to it and use it every day, but we don’t always appreciate just how potent it can be in its use as a therapeutic tool. Nordoff Robbins use music to evoke real change in people’s lives, and that is music working at its best”

Fat Cops says; “We are honoured to be part of the Get Loud 2019 bill! For us, this is a great opportunity to share our music and do what we love in support of a really amazing charity. All of us in the band have days jobs; an unlikely bunch who have come together to make music - but that difference is what we are proud of, it is what sets us apart from others in the market, and so to support a charity which champions not only musical, but personal difference and diversity, feels like the perfect fit"

Icons galore reign supreme at Brighton’s Komedia, as ‘I’m Not In Love’ titans 10cc play an unbelievably small show in the famed venue’s basement - delving across their five decades in music for an iconic moment down on the south coast. Joining them in Brighton is UK singer and one-time Slits member Hollie Cook, who will be sharing her charismatic and dynamic reggae sounds. Fresh from owning festival main stages, the riff-punk licks of Skindred bring their undeniable live presence to The Town Hall (The Crypt) in Middlesborough for an action-packed set of heavyweight classics, while “Place Your Hands” high, as the anthemic Reef take over Leeds’ famed Brudenell Social Club with what’s sure to be a storming night of thrilling rock. With Scottish hard-rock legends Nazareth bringing their huge show to a palpable Edinburgh - it ensures that Nordoff Robbins’ Get Loud 2019 is once again serving up something special this September.

10CC said; “We feel privileged to be able to take part in the Get Loud campaign and help to raise awareness for the amazing work that Nordoff Robbins does with music therapy. Music is a kind of therapy for us too and so it’s wonderful to see that it can have such a dramatic effect on young people who have difficulty communicating in other ways, and that participating can bring them so much joy.”

Hollie Cook says; "The music we create is a real representation of a person - an outlet for personal creativity, thoughts and feelings. The more music I make, the more personal and true representation of myself is, and that is so valuable to me, so I can completely relate to what Nordoff Robbins offer in music therapy to those really struggling; an opportunity for true self-expression"

Reef says; “We are totally stoked to have been asked by the fantastic Nordoff Robbins to be a part of the GET LOUD lineup. Music is such an important part of all of our lives and it makes real sense for us to be involved with this fantastic charity in some small way. Let’s help Nordoff Robbins continue to bring people together with music and try to make a positive difference to people’s lives.”

Nazareth says; “It’s a pleasure to be playing this gig for Nordoff Robbins, and be part of the Get Loud campaign. We have been making music for many years, and seen the positive impact music can have. Whatever your story, or journey, music can be a support and we are totally behind Nordoff Robbins’ work in offering that to so many people”

As the UK’s largest independent music therapy charity, Nordoff Robbins celebrates the connection and joy music can bring to those with life-limiting illnesses, physical disabilities or emotional challenges. Working across the country it offers vital support to adults and children through dedicated one-to-one and group music therapy sessions. Over the years the charity has welcomed the likes of Chic’s Nile Rodgers, Dame Shirley Bassey, Ellie Goulding, The Script, Iron Maiden’s Bruce Dickinson, Rudimental and many more to experience its work first-hand.

Nordoff Robbins music therapists are trained to the highest standards through its Master of Music Therapy (MMT) programme and work in schools, hospitals, care homes, prisons, brain injury units, and mental health services to reach and support the UK's most vulnerable and isolated people, when and where they need help most.

Since Get Loud started in 2016, the charity has celebrated the power of music with some of the most influential names in music, raising an incredible £280,000 to date.

Julie Whelan, Chief Executive of Nordoff Robbins said: “Our Get Loud campaign gives us the chance to highlight the way in which music can truly enrich the lives of people facing some very difficult challenges, and promote the work we are doing in communities right across the UK. We thank all of our Get Loud artists for joining us this year – together, we look forward to celebrating the work of Nordoff Robbins, and promoting the incredible power of music.”

Jon Ellery, Managing Director at Marshall Amplification said: “Marshall Amplification is proud to support the life changing work of Nordoff Robbins and their Get Loud campaign. We believe this campaign is a brilliant demonstration of the phenomenal impact music can have on people’s lives and we are honoured to be a part of it.”