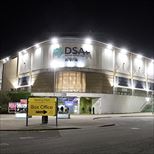 For events with no age limit, under 16's must be accompanied by an adult. If you are lucky enough to look under 25 you will be asked for I.D to purchase alcohol. The venue reserves the right to refuse service.