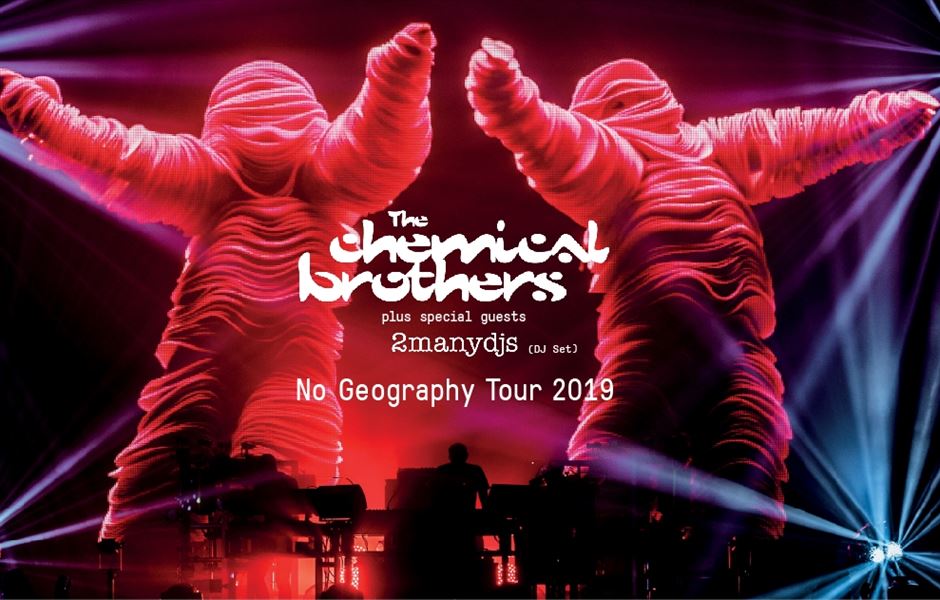 The Chemical Brothers follow the release of their hugely acclaimed ninth album No Geography with the announcement of their biggest ever UK headline show, as well as a new single and details of the first ever deluxe reissue of an album from their back catalogue.

Following the band’s recent All Points East headline show, the band have announced a gig at London’s O2 Arena on November 30th 2019. A full list of forthcoming Chemical Brothers shows in the UK:

Support on the band’s November tour comes from very special guests 2ManyDJs. Tickets are on sale from Friday 14th June; a pre-sale starts on Wednesday 12th June for O2 customers and fans signed up to the band’s mailing list.

Prior to those shows, The Chemical Brothers release a new single and announce the release of a special deluxe edition their classic third album.

Eve Of Destruction is the opening track on No Geography and has been a staple of the band’s DJ sets for the last two years. A relentless groove that gives way to a jacking house chorus, it features vocals from Norwegian singer Aurora and Japanese rapper Nene. The single is released ahead of their headline slot at Glastonbury Festival this month; a stunning visual for the track has been created by the band’s longterm collaborators Adam Smith and Marcus Lyall.

Then, this autumn, The Chemical Brothers will release a new, fully expanded version of their classic third album Surrender (date TBC). The deluxe reissue will feature the original 1999 album with previously unreleased ‘Secret Psychedelic Mixes’ of Surrender album tracks as well as a selection of the remixes from the time and a DVD of restored promo videos and film of their legendary Glastonbury 2000 performance (still reckoned to have drawn the biggest ever crowd to the Pyramid Stage). The first copies preordered will receive an extremely limited pressing of the original Electronic Battle Weapon 3 & 4 on coloured 10” vinyl. Surrender will be released as 4 12” vinyl and 3 CD/1 DVD sets. Full details of the deluxe package and release date will be announced shortly.