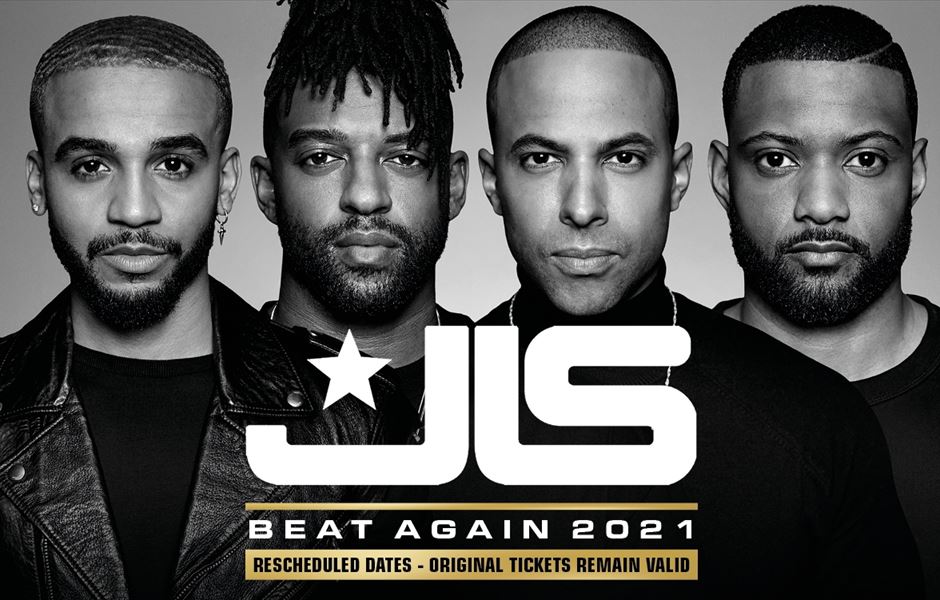 United Kingdom, Friday 10th July Multi BRIT and MOBO Award winning boy band JLS today announce the full list of  rescheduled shows for their eagerly awaited ‘Beat Again’ UK and Ireland tour. Due to the uncertainty of COVID-19 JB, Aston, Marvin and Oritsé have taken the decision to move the tour to June and July of next year in order to ensure the 28 date run is as safe and enjoyable as possible for fans, crew and venue staff.

The tour will play multiple nights at 15 different arenas across the UK and Ireland starting at Belfast SSE Arena on June 11th 2021 and closing at London’s iconic o2 Arena on July 18th. Speaking of the rescheduled 2021 tour dates JLS said “with regret we’ve had to make the decision to reschedule our JLS Beat Again tour to June 2021 as ensuring the safety of our incredible fans, crew and venue staff is our main priority. Our reunion tour is such a monumental moment for us as a band that we want to make sure we are able to give the best show possible. Given the amount of time and preparation it takes to produce an event of such scale we’ve had to postpone to a time that permits us to do so. We can’t wait to see you all next year and thank you for your patience and endless support”.

In light of the rescheduled dates being announced today, this Sunday also marks the 11 year anniversary of the bands iconic chart hit ‘Beat Again’, the track propelled the band to new heights winning BRIT Awards for both ‘Best British Single’ and ‘Best British Breakthrough’, as well as being named the fastest selling debut single of 2009.

The Beat Again tour is an opportunity for JLS fans across the country to come together to enjoy the hits which have continuously soundtracked the British charts for seven years running. The new list of dates also includes the free NHS matinee show the band are putting on for all NHS frontline staff and primary care workers at Birmingham Resorts World Arena on July 3rd. All tickets will be valid for new dates, please contact your point of purchase for more information, full list of new tour dates noted below: