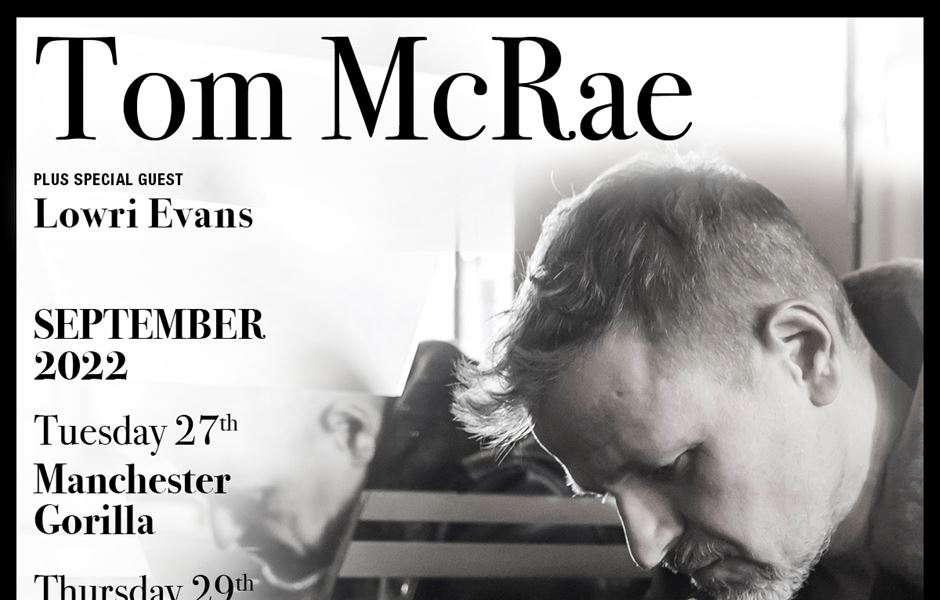 British singer-songwriter, Tom McRae will be heading out on three very special UK tour dates in September 2022. Tom will perform at Glasgow King Tuts on 26th, Manchester Gorilla on 27th and London Union Chapel on 29th September. The support act for the shows will be Lowri Evans, with whom Tom recently collaborated on a lockdown album of duets.

While Covid shut the music world down, McRae stayed busy. His 2001 Mercury-nominated debut was remastered and re-released on vinyl, spawning a duet with local Belgian star Wannes Capelle on a reworking of McRae’s song, Bloodless, which became a surprise radio hit.  A new album of duets with French artists is scheduled for release next year to coincide with McRae’s 2022 tour.

Tom also spent a large part of 2021 translating the songs of French superstar, Michel Polnareff, for future release by new BMG artists, as well as working on the musical version of the 1969 Oscar winning movie, Midnight Cowboy. Tom’s 2001 debut album (re-released in 2020) was nominated for The Mercury Prize, a Brit Award, and Q Magazine Award. The album went on to sell 140,000 copies worldwide, going silver in France - which along with Belgium and Norway was especially receptive to McRae’s music. As well as his own music, Tom has written for other artists over the years, most notably Marianne Faithfull on her 2014 album “Give My Love To London”.

Over the years Tom has garnered a reputation as a great live act, whether solo, trio, full band, or with string quartet. Tom’s relationship with his audience is very special, as anyone who has witnessed the shows can attest. Despite McRae’s melancholy reputation, the shows are often funny, heartfelt, and rousing. The 2020 European tour to accompany the re-release of Tom’s debut was inevitably rescheduled for 2022, but during lockdown McRae live-streamed a series of shows (“Some Dark Cafe”) featuring musical guests David Ford, Olly Knights (Turin Brakes), Keren Ann, Justin Currie (Del Amitri), and poet Laureate Simon Armitage, who calls of McRae “one of our best living songwriters”

Tickets for the new dates are on sale now and available from www.gigsandtours.com  / www.ticketmaster.co.uk