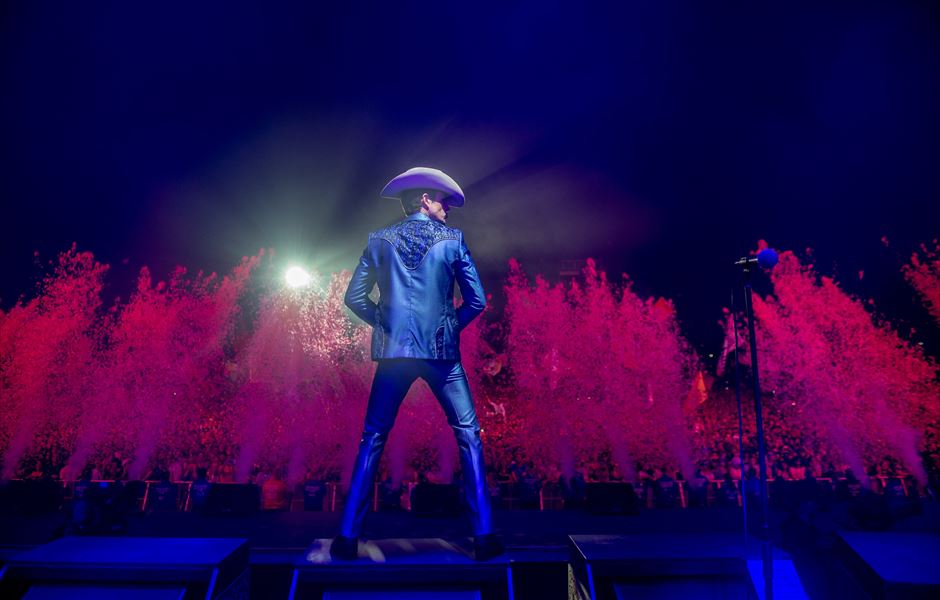 THE KILLERS have added two extra dates to their newly announced 2020 stadium tour, following exceptional demand as tickets went on general sale this morning. The band, whose new album, Imploding The Mirage, will be released ahead of the tour next spring, will play additional shows in London’s Emirates Stadium and at Dublin’s Malahide Castle on Friday 5th June and Wednesday 17th June respectively.

The Killers, whose most recent UK sojourn was their spectacular Glastonbury 2019 headline set (look back at that jubilant night here), will be joined by Special Guests Blossoms (dates marked **), Sam Fender (dates marked ^^) and Manic Street Preachers (dates marked ##) at the shows, as detailed below:

Pre-order Imploding The Mirage via the official UK store.

Accessible tickets are available from venues direct except Manchester and Falkirk which are via www.ticketmaster.co.uk

Since the release of their 2004 debut, Hot Fuss, with its now-classic breakthrough singles Mr Brightside and Somebody Told Me, Las Vegas’ The Killers have gone on to sell 28 million albums, win countless Grammy, Brit, Q, NME nominations and awards and headline stadia and festivals around the world.

Hot Fuss’ follow up, Sam’s Town, a love letter of sorts to the band’s hometown, was released in 2006 and featured When You Were Young and Read My Mind. Third studio album, Day & Age, was released to widespread critical acclaim in 2008, anchored by the massive global hit, Human. 2012’s Battle Born then saw them expand their world tour into countries they’ve never visited before, and ultimately headlining a sold out Wembley Stadium, one of the most significant and memorable shows of their career.

The Killers’ most recent LP, Wonderful Wonderful, was released in September 2017 and saw the group achieve a record breaking fifth consecutive UK Number One, also topping the U.S chart for the very first time. With the addition of that album’s hits, The Man and Run For Cover, The Killers have amassed a truly incredible back catalogue.

2019 saw The Killers unveil a stand alone song, Land Of The Free, a heartfelt lament inspired by current events and recent national tragedies in the United States that was accompanied by a video from Academy Award-winning director Spike Lee. Later in 2019, the band headlined Glastonbury Festival for the second time (the first was in 2007), playing a hit laden set that also saw them joined by some of their ultimate heroes, Pet Shop Boys and Johnny Marr, in the encore.