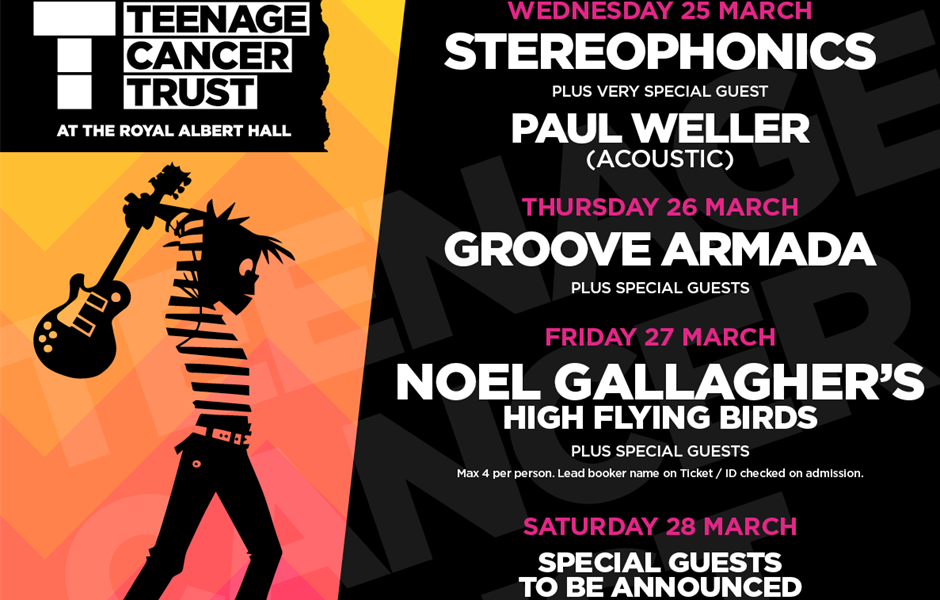 With more special guests to be announced soon

Tickets go on sale Friday 24th January at 9.30am

Teenage Cancer Trust has announced four of the acts set to headline its annual fundraising concert series at the Royal Albert Hall in 2020, taking place from March 23rd to March 29th.

Kicking off proceedings at the Royal Albert Hall is Stereophonics who performed at the first ever Teenage Cancer Trust gig at the Royal Albert Hall back in 2000 and return this year for the twentieth anniversary shows. With unparalleled longevity and continued success, Stereophonics are a band woven into the fabric of popular music. With new album ‘Kind’ Kelly Jones continues to cement his place amongst the great British songwriters with an ability to sketch and capture truth and beauty from everyday observations as well as delving into his own life experiences. Having achieved 7 number 1 albums, 10 top 10 albums, 23 Platinum Sales Awards, over 10 million albums sold worldwide, 5 BRIT nominations and 1 BRIT Award win, and still headlining arenas and festivals to legions of dedicated fans, Stereophonics stand as undeniable giants of the current music scene.

Also featuring with the Stereophonics for an acoustic set is very special guest Paul Weller, another one who was part of the first Teenage Cancer Trust gig at the Royal Albert Hall. With a career spanning releases that traverse the sounds of blue-eyed soul, new wave, punk rock and the mod revival, Paul Weller is a musical chameleon who proudly marches to the beat of his own drum. Introduced to the world as a member of bands The Jam and The Style Council before establishing a well-received solo career, he has become one of Britain’s most enduring musicians and cultural figures.

From their humble beginnings as London club night promoters, Andy Cato and Tom Findlay aka Groove Armada have solidified themselves as one of electronic music’s most innovative, influential and recognisable acts. Storming onto the scene with their seminal debut album Northern Star, the duo quickly carved out their niche in the downtempo alcoves of dance music, garnering several GRAMMY and BRIT Award nominations along the way.

Last year saw the duo perform as a live act for the first time since 2013, featuring their full original band and touring setup. The shows naturally amazed audiences across the UK and expect an equally unmissable performance come March 26th. The band will be releasing a brand new studio album this summer and will announce further UK shows soon.

Noel Gallagher’s High Flying Birds released their eponymous debut album in 2011 on Sour Mash Records. The album went double platinum in the UK and has sold over 2.5 million copies worldwide. The second album ‘Chasing Yesterday’ was released in March 2015 - the first album to be produced as well as written by Noel. The third album ‘Who Built The Moon?’ followed in 2017 debuting in the UK at Number 1 and achieving gold certification in less than 2 weeks after its release – making it a hat trick of Number 1 solo albums for Noel. ‘Who Built The Moon?’ was also a record-breaking 10th consecutive chart-topping studio album in the UK for Noel – no other artist has achieved such a feat.

Noel Gallagher’s High Flying Birds will release their ‘Blue Moon Rising’ EP on 6th March 2020 which features the recent single ‘Wandering Star’. The EP, which is available to pre-order now, features new songs as well as remixes of the title track and will be available digitally and on limited edition vinyl formats. ‘Blue Moon Rising’ is the third EP of new music from Noel to be released in less than a year – ‘Black Star Dancing’ was released in June 2019 followed by ‘This Is The Place’ in September.

With over 500 million copies cumulatively sold as the mastermind behind seminal disco/funk band CHIC and a songwriter/producer for Sister Sledge, Diana Ross, David Bowie, Madonna and Daft Punk, few artists have a resume as impressive as Nile Rodgers. His pioneering and indelible contributions to music have earned him three Grammy Awards and inductions into the Rock & Roll Hall Of Fame and the honour of being a chairman for the Songwriters Hall Of Fame. More recently, Nile has been appointed as the first ever Chief Creative Advisor for the legendary Abbey Road Studios and was included in “festival best” performances at both Glastonbury and Coachella that resulted in the BBC nominating the band for the BBC Music Awards as “Best Live Performance”.
Nile Rodgers & CHIC are set to perform what will be a fittingly upbeat and euphoric show to close out the 20th edition of Teenage Cancer Trust at the Royal Albert Hall.

2020 marks the 20th year of the charity’s phenomenally successful series of music and comedy events, which are curated by The Who frontman and Teenage Cancer Trust Patron Roger Daltrey CBE, and raise funds to support young people with cancer.    The gigs will also help celebrate the 30th anniversary of Teenage Cancer Trust.

Ever since The Who reformed for the first Teenage Cancer Trust Royal Albert Hall show in 2000, the annual events have witnessed some extraordinary, once in a lifetime shows  from Noel Gallagher and Damon Albarn performing together for the first time ever in 2013, Sir Paul McCartney in 2012, plus the likes of Oasis, Muse, Ed Sheeran, Florence + The Machine and many more.

“Once again we’ve got some incredible artists on the bill for 2020 and I can’t thank them enough for giving up their time for Teenage Cancer Trust. Since the first gig back in 2000 audiences have raised millions to fund Teenage Cancer Trust nurses, support teams and special hospital wards that have helped young people cope with some unimaginably hard times. Without Teenage Cancer Trust these specialist services would simply not be there.

“I’ve seen first-hand the difference this support makes to so many young people with cancer over the years and I’m beyond proud to be a part of the Teenage Cancer Trust team. Everyone who’s helped us achieve this is a hero in my book, and I’d like to thank everyone who has got us this far.

“Teenage Cancer Trust started out 30 years ago to change everything for young people with cancer. And that’s exactly what we’ve done. But we want a world where cancer doesn’t stop young people from living their lives-there’s so much more we need to do.

“This age group deserves these facilities and programmes in our NHS, but without your support for this charity they would not exist.

By buying a ticket to these shows you will be helping this great cause do exactly that.”

Before Teenage Cancer Trust was established in 1990 there was no specialist cancer care for teenagers and young adults.   Those aged 13-24 were being treated on adult wards, or in children’s wards, and this could cause additional stress and trauma. Many felt alone and isolated, as it was likely they’d never meet another person their age with cancer.

As Teenage Cancer Trust celebrates 30 years, the charity is focused on driving up survival rates for young people with cancer, championing their needs to ensure they have equal access to vital care and expanding its own services to be there after treatment ends, as young people rebuild their lives after cancer.

“The leap forward in care that Teenage Cancer Trust has been able to provide to young people facing cancer over the past 30 years has only been possible thanks to our generous supporters – including our Royal Albert Hall artists and audiences.  But much more needs to change, and we can’t wait another 30 years for that to happen.

“That’s we’re incredibly grateful for the amazing support from the artists getting involved in our 2020 gigs. It’s going to be an unforgettable experience and will help us support every young person with cancer who needs us.”

Around 100 young people who’ve been supported by Teenage Cancer Trust will enjoy the ‘Ultimate Backstage Experience’ during the 2020 gig series. As part of an unforgettable night, the charity offers them the chance to meet with the acts, write and perform their own song, and to appear on stage alongside Roger Daltrey to share experiences and thank audiences for their support.