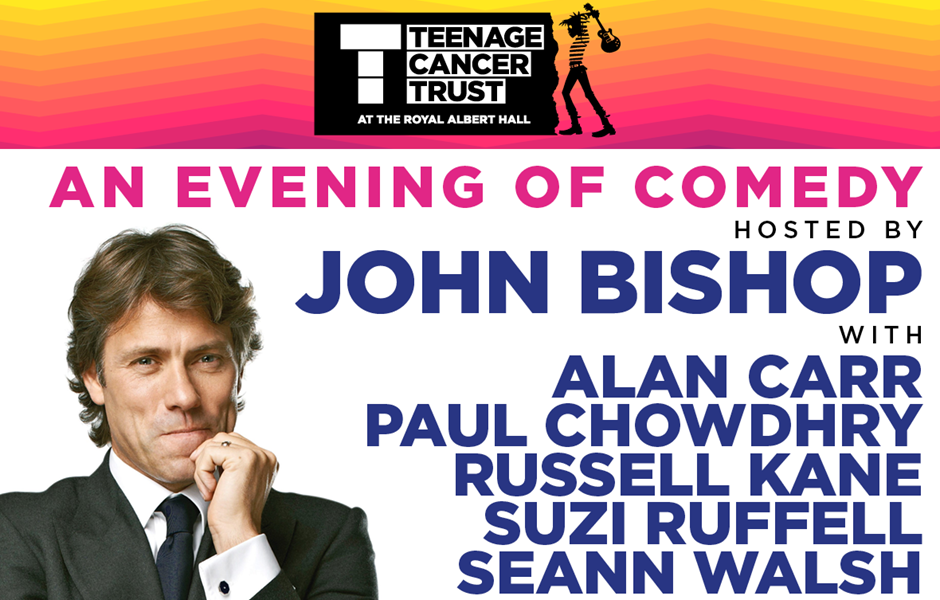 An Evening of Comedy Hosted by John Bishop with:

The Who
Saturday 28th March

Teenage Cancer Trust have revealed further acts set to headline this year’s comedy night during the annual fundraising concert series at the Royal Albert Hall in 2020, which take place from March 23rd to March 29th. Acts/artists may be subject to change.

With 16 series of Channel 4’s ‘Chatty Man’ under his belt, Alan Carr has become one of Britain’s most successful and treasured comedians. Alan’s unique sense of humour and effortless stage presence has won a multitude of awards including the publicly voted 2015 NTA and a prestigious BAFTA in 2013.

Russell Kane is best known for the BBC Sounds podcast, ‘Evil Genius’ which has become a flagship show and the best performing podcast on the platform. He recently finished his sell-out UK & Ireland tour ‘The Fast and The Curious’.

Regarded as one of the best up-and-coming acts, Suzi Ruffell won ‘Best Club Comic’ at the 2019 Chortle Awards. Suzi has also appeared on Live at the Apollo, Mock The Week, Roast Battle, Ultimate Worrier, Hypothetical, Stand Up Central and Comedy Central at the Comedy Store.

Charming, charismatic and a natural motor mouth, Seann Walsh is the most precocious talent to emerge from the UK comedy circuit in years. A mainstay on British television Walsh has appeared on Virtually Famous, The Jonathan Ross Show, Tonight at The London Palladium, Celebrity Juice, 8 Out Of 10 Cats and Live At The Apollo.

Before Teenage Cancer Trust was established in 1990 there was no specialist cancer care for teenagers and young adults. Those aged 13-24 were being treated on adult wards, or in children’s wards, and this could cause additional stress and trauma. Many felt alone and isolated, as it was likely they’d never meet another person their age with cancer.

As Teenage Cancer Trust celebrates 30 years, the charity is focused on driving up survival rates for young People with cancer, championing their needs to ensure they have equal access to vital care and expanding its own services to be there after treatment ends, as young people rebuild their lives after cancer.

Tickets on sale now. For line-up and ticketing information visit:

Your ticket is not valid if offered for sale or resold unless it's through our official face value resale partner Twickets.