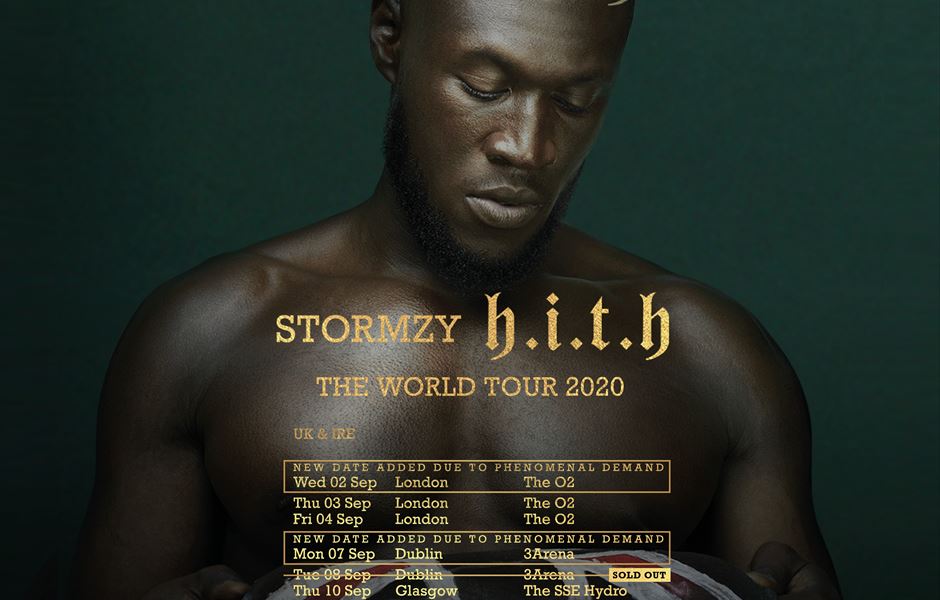 EXTRA DATES ADDED DUE TO DEMAND

STORMZY’S SECOND ALBUM, ‘HEAVY IS THE HEAD’ IS OUT FRIDAY DECEMBER 13TH 2019

Set to be one of the most highly anticipated tours of 2020, Stormzy has today announced a huge 58-date ‘H.I.T.H. World Tour’. With shows spanning across Europe, Asia, Australia, New Zealand, North America, UK & Ireland and Africa, the tour marks Stormzy’s biggest live offering to date. Kicking off the tour in Dubai on February 7th and concluding in Africa in October, the tour will also see him make his solo debut at The O2, London for three nights on 2nd, 3rd & 4th of September, marking his first solo shows in the capital since his 3-day stint at O2 Academy Brixton in May 2017! Subsequent to The O2 shows in London, Stormzy will grace the stages of 11 more arenas throughout the UK and Ireland, concluding at Bournemouth’s international Centre on 22nd September. Thereafter he will head to Africa to tour for the first time, notably playing a date in his homeland of Ghana, before ending the world tour with a show in Lagos, Nigeria.

The touring news comes straight off the back of a phenomenal few weeks for 26-year-old Stormzy. Kicking-off the month announcing his hugely anticipated album ‘Heavy Is The Head’, last week the musician also announced his brand new single ‘Own It’ featuring musical heavyweights Ed Sheeran and Burna Boy which is on course become Stormzy’s 7th top 10 single in today’s Official UK Charts!

Stormzy’s forthcoming album, ‘Heavy Is The Head’ marks a hugely exciting return for the multi award-winning phenomenon and is a record which has been executively produced entirely by the musician himself; showcasing his world class lyricism and musicality alongside many of his celebrated and relatable subject matters. The album also features additional vocals from some of the most exciting musicians of this generation - all of whom have been hand-picked by Stormzy including, (in alphabetical order) Aitch, Burna Boy, Ed Sheeran, Headie One, H.E.R., Tiana Major9 and YEBBA with production from Fred Gibson, Fraser T Smith, T-Minus and others.
To date, Stormzy has unveiled four of the sixteen album tracks, leaving twelve unheard tracks still to come. In April he made his remarkable return to the spotlight where he unveiled ‘Vossi Bop’, his first release since 2017. ‘Vossi Bop’ broke the record for the biggest week one streams for a British Rapper, ever, with streams accumulating to over 12.7 million! The single saw a combined sales total of 94,495 and subsequently earnt Stormzy his first ever UK #1 single, holding the top position for two consecutive weeks! Shortly after he unveiled the stunning ‘Crown’ before unveiling his latest release ‘Wiley Flow’ – where he paid homage to British MC, Wiley.
The album announcement follows on from Stormzy being hailed as one of TIME Magazine’s ten ‘Next Generation Leaders’ last month which coincided with him being the only leader honoured with a cover for the special issue.
Before Stormzy released his platinum-selling #1 debut album, ‘Gang Signs & Prayer’ in February 2017, many would merely have called him one of the most promising rappers on the UK scene. Nearly three years on however, that description is utterly inadequate. A showman like no other, his remarkable ascent has been accompanied by his honest and relatable character. Known for evolving the underground musical landscape, as well as being a perennial political agitator, Stormzy is a true spokesman of black empowerment and social activism. He has become one of the UK’s most inspiring cultural figures and earlier this year, during his headline performance at Glastonbury Festival, he took the opportunity to highlight a plethora of social issues, including the injustice of young black children being criminalised in a biased and disproportionate justice system.

Despite being out of the ‘musical’ spotlight last year, his philanthropy continued. In July 2018 Stormzy launched ‘The Stormzy Scholarship’ – a studentship which funds the study of two black students, each year, at Cambridge University and this summer, launched its second year of the scholarship. Subsequent to the scholarship, he unveiled #Merky Books, an imprint formed in collaboration with Penguin Random House UK which saw the release of his own book ‘Rise Up: The Story So Far’ in November. Shortly after he revealed the imprint’s ‘Writers’ Prize’ – an initiative which looks for the best authors of the next generation. Adding further strings to his bow, the Ghanaian MC also announced his very own music record label #Merky Records in January 2018 - a subsidiary of Atlantic Records UK – which will look to sign the hottest new and emerging talent.

Further to Stormzy’s incredible rise within his recorded music, the Croydon-born MC has also broken records in the live sphere and in June earlier this year he became the first British Rapper to ever headline Glastonbury Festival, one of the world’s biggest music festivals! Shortly after, he headed to Ibiza for his annual #Merky Festival – a 2-day event which hosts some of the UK’s most in-demand artists. This year the festival sold-out in 48 hours, marking the first time - in Ibiza history – for a ticketed event to have all tickets sold off of the island, prior to the event.

Stayed tuned to watch Stormzy pave the way with his genre-defining record, “Heavy Is The Head.”

TICKETS FOR ALL DATES AVAILABLE NOW FROM http://gigst.rs/Stormzy