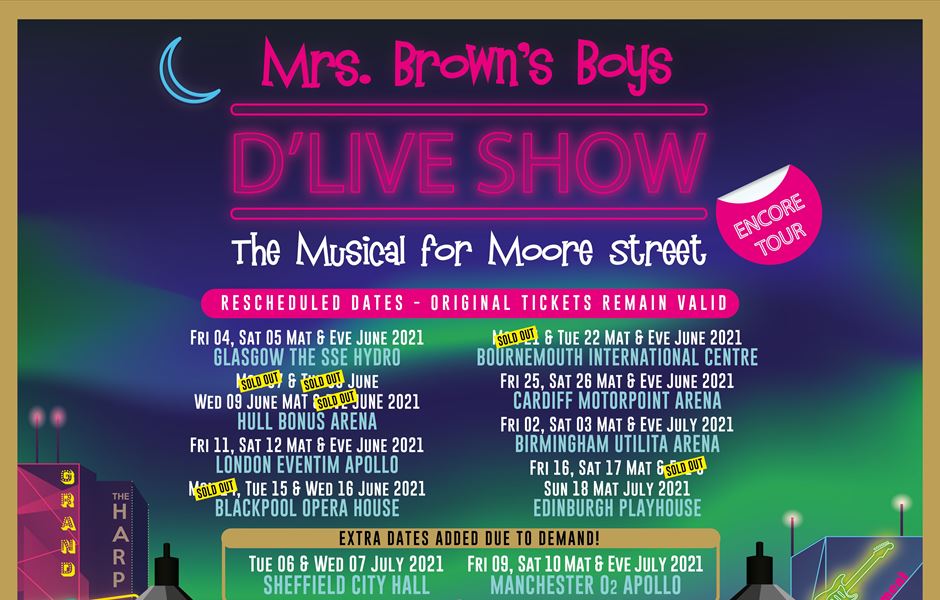 Sheffield and Manchester dates added due to high demand!

The Award-Winning Brendan O’Carroll and Mrs. Brown’s Boys will be returning to theatres and arenas across the UK in 2021 with ‘Mrs Brown D’Live Show...’. Due to high demand extra dates have been added in Sheffield and Manchester.

Bringing Mrs. Brown’s Boys D’Musical production back, they will perform in some venues and cities that they haven’t played in for many years. Mrs. Brown’s Boys promises to take audiences on an exhilarating and side-splitting adventure. Brendan O’Carroll said: “It’s the funniest thing I’ve ever written. Even I laugh and I know what’s coming next!” [INCOMPATIBLE CHARACTER]

Mrs. Brown’s Boys success has been nothing short of incredible. Voted the No. 1 Sitcom of the 21st Century, awards include 5 BAFTAs, 5 National Television Awards, 3 TV Choice Awards, 4 IFTA awards, 3 TV Times Awards as well as RTS, TRIC and National Comedy Awards. It is a ratings smash across the globe. Mrs. Brown’s Boys live show has broken box office records across the UK, Ireland, Australia, New Zealand and Canada.

If you haven’t experienced Mrs. Brown’s Boys live show, this tour is set to be one of the hottest tickets for 2021 and is not to be missed.  Tickets for the extra dates go on sale at 10am on Friday 4th December. Tickets for all dates are available from http://gigst.rs/MrsB.

This tour has been rescheduled from summer 2020 – original tickets remain valid.