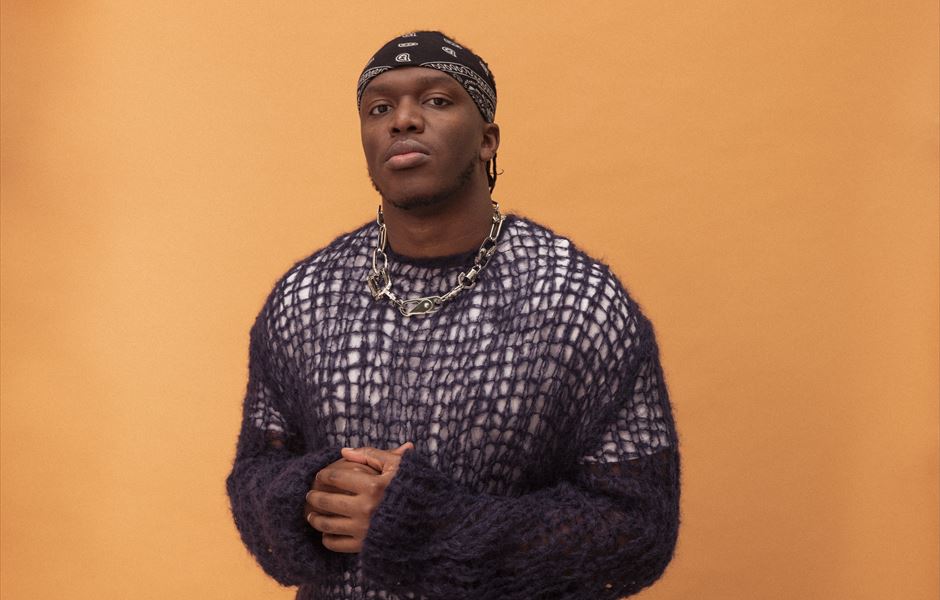 PRE-ORDER ALL OVER THE PLACE [HERE]

TICKETS ON SALE SATURDAY 1 MAY AT 9AM AT WWW.TICKETMASTER.CO.UK

As the biggest-selling U.K. breakthrough of 2020 with his debut LP Dissimulation and scoring six Top 10 singles including collaborations with Rick Ross, Trippie Redd and Tion Wayne, alongside latest hits with Craig David, Anne-Marie and YUNGBLUD, KSI – Olajide ‘JJ’ Olatunji today announces details of his highly anticipated second studio album and biggest live headline show to date at The SSE Arena, Wembley on 25 February 2022. Tickets go on sale to the general public on Saturday 1 May at 9am at www.ticketmaster.co.uk.

The brand-new album titled All Over The Place will include all three previously released singles “Really Love”, “Don’t Play” and “Patience” as well as new tracks with features from American rappers Future and 21 Savage, music artist Jay1, singer Gracey and more. The new album will be available on CD, cassette, vinyl and all digital platforms via BMG / RBC Records on 16 July. Album bundles with exclusive merchandise including signed photos and limited-edition Gold disc CDs are also available. Pre-order All Over The Place [HERE].

All Over The Place out 16 July via BMG / RBC Records

*The thirteenth track on the vinyl format will be an exclusive song titled, “Smoke” ft. Nevve.

On the announcement of his new album, KSI says: “I’m super excited for the people to hear this album. I’ve improved on everything I did with Dissimulation. The singing has improved. The writing has improved. The beats have more layers to it, I’m a lot more experimental, I’m way more comfortable on the mic etc. This album is a reflection of a lot of hard work and passion combined and i'm really proud to be releasing it.”

The latest single from the upcoming album, “Patience” ft. YUNGBLUD & Polo G, which peaked at #3 in the UK Official Charts and currently A List on BBC Radio 1, was born out of a direct result of the pandemic, coming to terms with the challenges of comprehending life as we used to know it. The track is an upbeat pop anthem, designed to dispel any negative energy and ensuring that we will come out of the pandemic feeling better and stronger. In a world exclusive performance, KSI & YUNGBLUD performed “Patience” on The Late Late Show with James Corden last week. You can see all the exclusive backstage action via Notion [HERE].

“The Moment” is the first song on KSI’s album, a prominent track about seizing the opportunity to make something of his life and reaping the rewards. “Number 2” which features American rappers Future & 21 Savage is a boastful tune, confirming to those that ever doubted him that he’s won. We witness the intimate side of JJ for the first time on the album in solo single, “You” which expresses his love for someone close to him, sharing that nothing will get in the way of their love for one another. “You” will be available on all streaming platforms prior to the album release on 4 June and KSI will perform the single on Channel 4 Sunday Brunch on 25 July.

KSI will be hoping to replicate the success of “Don’t Play” with Anne-Marie & Digital Farm Animals which peaked at #2 in the Official Charts spending 12 weeks in the Top 10 with a ring ready performance on BBC The One Show earlier this year. In this track, JJ details his experience of heartbreak and how love can make you vulnerable which segues into KSI’s debut garage chart smash, “Really Love” featuring Craig David. Performing the song on ITV The Jonathan Ross Show and BBC One Top of the Pops last year, the song peaked at #3 in the Official Charts and spent 15 weeks in the Top 40.

Teaming up with musicians Jay1 & Deno, KSI is letting the world know that when he wins, those around him win too. “Madness” is an irate track about letting his doubters know how far he’s come tied to tracks such as, “Rent Free” ft. Gracey which is about how he’s always on people’s minds without even trying to be. The serious side of KSI flicks between more playful tracks on the album such as “Silly” featuring Bugzy Malone, “Flash It” ft. Rico Love and “Sleeping With The Enemy” ft. S-X. “No Time” ft. Lil Durk is about his relentless work ethic and how he remains focused, ensuring his presence always be known.

To coincide with the album announcement, KSI also confirms his biggest live show to date with a headline show at The SSE Arena, Wembley in London on 25 February 2022. This one-off show will follow his highly anticipated sold-out U.K. tour in October 2021 which kicks off on 1 October 2021 in Glasgow with 13 dates scheduled throughout the U.K. including Newcastle, Hull, Birmingham and Bournemouth with a final show in Dublin, Ireland on 17 October. See below for the current full schedule including all confirmed summer festival appearances.

On his headline Wembley show, KSI says: “To say I’m in shock, is an understatement. I can’t believe I’m in a position where I can play at Wembley. It’s all a bit crazy. I still remember times when I struggled to sell out 100 capacity rooms in the U.K, and now I’m at a point where I’m going to be performing in front of thousands in such an iconic arena. I’m so ready for this and I can’t wait to see you all there for the ultimate ride.”

Tickets for KSI’s headline show at The SSE Arena, Wembley go on sale to the general public on Saturday 1 May at 9am at www.ticketmaster.co.uk. Fans who pre-order the new album will get access to pre-sale tickets from Wednesday 28 April at 9am.

Hitting number two in the UK album chart and with over a billion streams, in Dissimulation KSI creates space for both his public persona and the personal: big hit features with the likes of Rick Ross and Lil Baby (Down Like That) and AJ Tracey (Tides) sit alongside more intimate, honest tracks. No stranger to defying expectations, Dissimulation received critical acclaim. Clash labelled it “an excellent body of work”; “he’s absolutely smashed it” proclaimed Metro.

It’s no surprise that KSI has been seen on the cover of The Sunday Times Magazine and Music Week; The Observer Magazine, Viper and Notion. Other labels and artists want a piece of the KSI pie too: just look to the success of his features on S1mba’s Loose and Nathan Dawe’s BRIT nominated Lighter.

With his second album on the horizon, a 2021 tour which sold out in seconds, the launch of his own label and a single with Craig David (Really Love), Anne-Marie (Don’t Play) and YUNGBLUD (Patience), KSI is proving that music is very much his domain.

KSI brings with him the unrelenting work ethic and infectious energy which YouTube instilled in him. Despite his debut’s success, he’s certain Dissimulation just scratched the surface: the next record, he’s clear, will showcase his artistry’s further progression again. Given FAULT Magazine described KSI as “one of 2019’s biggest success stories - “an emergent hip-hop star” said The i - all eyes will be on his follow up. KSI’s task - writes The Observer - is “not just to make “YouTube rap” but the real thing”. Their verdict? “Mission accomplished.”

All Over The Place, the new album from KSI via BMG UK / RBC Records, out 16 July is available to pre-order now.