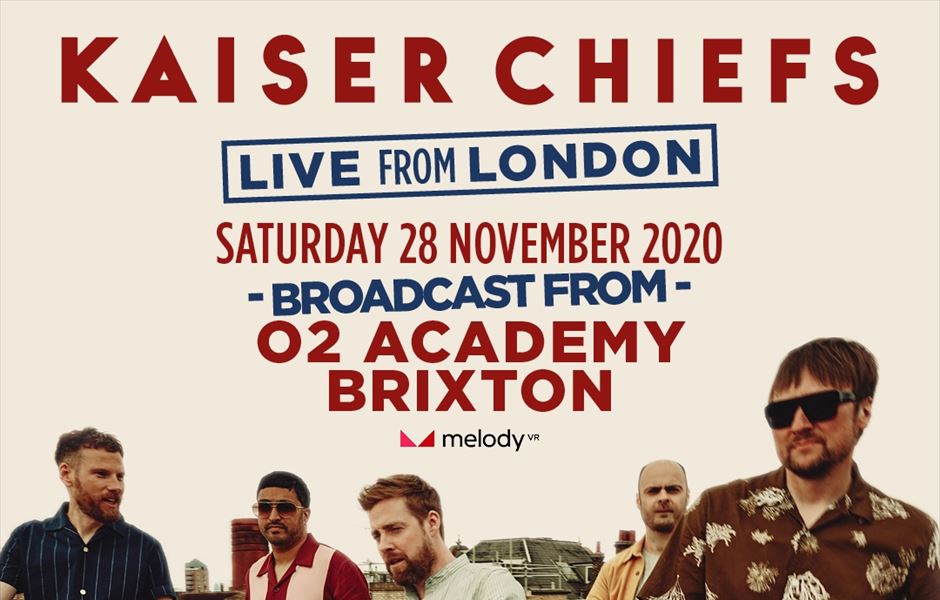 With a setlist packed with tracks from their recent and much-praised album Duck and anthems such as ‘I Predict A Riot’, ‘Oh My God’ and ‘Ruby’, Kaisers will bring us the rock ‘n’ roll celebration we’ve been waiting for.

Fans will join the action from home exclusively via the MelodyVR app on smartphones and VR headsets. Groundbreaking livestream technology will transport the audience from sofa to stage at the famous London venue, with a choice of camera angles to get close to the band and feel as though they’re really there.

This is the first time that Kaiser Chiefs have performed live since their epic sold-out show at The O2 Arena, and the show promises to be a complete one-off, full of immersive surprises and the raucous fun that the group is so known and loved for.

Ricky Wilson says “We’re over the moon to be back performing on stage for our MelodyVR show and it’s great to return to this brilliant venue. You guys will be with us in spirit and we’ll give this show ten times more energy for one hundred times more fun. We can’t wait to see you there!”

The multi-award-winning band has released seven studio albums to date including their Mercury-nominated debut, Employment, and its no.1 follow up, Yours Truly, Angry Mob, as well as chart-topping Education, Education, Education & War. Fifteen years into an incredible career, Kaiser Chiefs have solidly made their mark as indie heroes within the British music scene, with absolutely no sign of them slowing down.

Kaiser Chiefs, led by energetic frontman and national treasure Ricky Wilson, have enjoyed copious sold out shows at Brixton, most recently in early 2019 for their hugely successful UK headline tour.

Kaiser Chiefs LIVE FROM LONDON is exclusively available to watch via the MelodyVR app on smartphones and VR headsets. To be part of the live experience, download the MelodyVR app at on.melodyvr.com/app. After purchasing a ticket at LiveNation.co.uk, a redemption code and simple instructions on joining the stream will be sent. This show will be available to watch in the UK, USA, Austria, Belgium, Canada, France, Germany, Greece, Ireland, Italy, the Netherlands, Portugal, Spain, Sweden and Switzerland.