JEFF WAYNE'S MUSICAL VERSION OF ?THE WAR OF THE WORLDS' ALIVE ON STAGE! 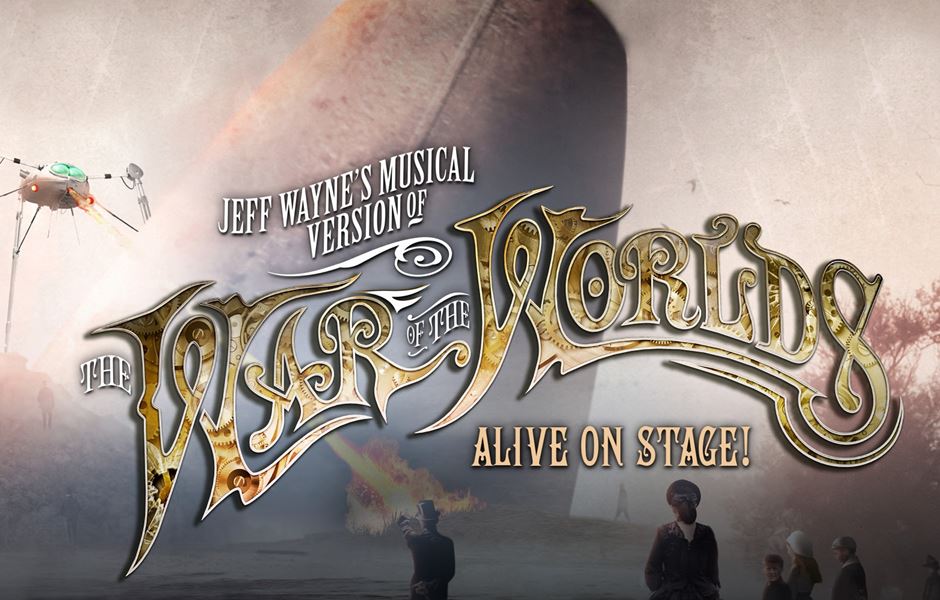 ‘THE WAR OF THE WORLDS’ ALIVE ON STAGE!

THE MULTI-AWARD WINNING MASTERPIECE RETURNS IN 2022.

INGLORIOUS' NATHAN JAMES as The Voice of Humanity

LIAM NEESON as The Journalist in 3D Holography

One of the most trailblazing tours of all time, Jeff Wayne’s Musical Version of ‘The War of The Worlds’ - Alive on Stage! returns to arenas throughout the UK in 2022.

Featuring a stellar cast with Strictly Come Dancing and Stage star Kevin Clifton as The Artilleryman, Blue’s Duncan James as Parson Nathaniel, Steps’ and stage star Claire Richards as Beth, The Parson’s Wife, and returning are Inglorious’ front man Nathan James as The Voice of Humanity,  and Anna-Marie Wayne as Carrie, The Journalist’s Fiancée, PLUS The Moody Blues’ Justin Hayward reprising his original role as The Sung Thoughts of The Journalist.

QUOTES FROM CAST AND JEFF WAYNE

Claire Richards said: "I am so thrilled to be joining the cast of Jeff Wayne’s The War of The Worlds for their 2022 Arena tour. To be a part of such an iconic production is so exciting, and I'm really looking forward to getting back out on the road next year.”

Kevin Clifton said:  “I am unbelievably excited to be joining the cast of Jeff Wayne’s The War of The Worlds. In 2022 this particular story could not be more relevant. After so long without live performance, what better experience could there be than this spectacular arena production complete with a full live onstage orchestra and special effects. 'Life Begins Again!’ "

Duncan James said:   “I have always been a fan of Jeff Wayne and to get to work with such a legend is a dream come true, and I am thrilled to work alongside an incredible cast. I honestly cannot wait to be back on the road and performing again.”

Justin Hayward said: “I’m very happy to be back as part of The War of the World’s family, this time with Jeff’s production ‘The Life Begins Again Tour’, coming to arenas through March and April, 2022.

Wherever I go in the world, ‘Forever Autumn’, along with ‘Nights in White Satin', is one of the songs that people know and love, and as a singer it’s a joy to perform. This production is sure to be spectacular, and the music as wonderful as ever.  I’m looking forward to it all very much”

Nathan James said: “I am so excited to be back touring with Jeff Wayne's Musical Version of The War of The Worlds as The Voice of Humanity. I had so much fun on the last tour and it's a real honour to know Jeff enjoyed my version of "Thunder Child '' enough to bring me back again! Last time I couldn't believe my luck and this time is no different. 43 years on and this double album still remains way ahead of its time and is still bringing so much joy. I can’t wait to perform this wonderful album again, to feel the heat of the Pyrotechnics on my epic leather coat and to be back in these incredible venues.”

Anna-Marie Wayne said: "I am so excited to be returning as Carrie, The Journalist’s Fiancée in the 2022 arena tour of Jeff Wayne's The War of The Worlds. It’s been a long road to get back to this point of opening up live entertainment but life truly does “Begin Again!”

Based on HG Wells’ dark Victorian tale, The War of The Worlds remains a firm favourite to millions around the world.

In 2006, TWOTW tour was considered a cutting-edge production with 6 trucks filled to the brim. In 2022, marking a momentous 16 years of touring, the production will be up to 12 including a host of new ingredients and special effects that will challenge and excite the senses for audiences of all ages, all set to Jeff’s iconic score.

The 8-piece Black Smoke Band and the symphonic ULLAdubULLA Strings.

Giant bridge from the lip of the stage out and over the audience.

The incineration of a Cast member.

In Sight and Sound - Callum O’Neil as ‘The War of The Worlds’ author, HG Wells.

Jeff Wayne said: "Like so many artists whose tours are starting up once again, I’m very privileged to be amongst them, returning with my Musical Version of The War of The Worlds - Alive on Stage.

We’ve called this tour The Life Begins Again Tour, a name for the times, but coincidentally, it comes from a theme with the same name first heard in my original 1978 double-album, after the Martians succumbed to one particular minuscule thing - Human bacteria that caused the Common Cold.

And in a sneeze, they were gone!

From that moment, people from all over Britain, Mankind began returning to their homes and loved ones -  life WAS beginning again

Let's hope that like HG's Martians, this horrible disease will be permanently defeated, and life will not just begin again, but stay forevermore.

For me, conducting world class artists and musicians surrounded by some of the most exciting technology imaginable, is always pure magic.

And welcome the great talents of Claire Richards, Duncan James, Kevin Clifton, along with returning members, Anna-Marie Wayne and Nathan James plus my friend and the original Sung Thoughts of The Journalist – The Moody Blues’ Justin Hayward.

I hope you'll join me and all those who make up The Life Begins Again Tour, as we visit UK arenas in March and April 2022.”

Jeff Wayne's double album was originally released by CBS Records in 1978 featuring Richard Burton, The Moody Blues’ Justin Hayward, David Essex, Chris Thompson and Julie Covington. It has enjoyed huge success and critical acclaim reaching the Top 10 in 22 countries and Number 1 in 11 of them along with two international hit singles ‘The Eve of The War’ and ‘Forever Autumn’, selling over 16 million records and spending over 330 weeks in the UK Album Charts to date.

Jeff’s Musical Version has won many awards including two UK Ivor Novellos, the US Best Recording in Science Fiction and Fantasy (the judges included Alfred Hitchcock, George Lucas and Steven Spielberg), as well as winning for Jeff, Classic Rock's 'Showman of The Year’ Award following the debut arena tour in 2006.

Jeff Wayne's Musical Version of ‘The War of The Worlds’ has grown into a true classic, acquiring new generations of devoted followers since its original release.

In 2016 it was seen at London’s Dominion Theatre for an extended Season, a chart-topping 5-hour Audible Audiobook featuring Michael Sheen, Taron Egerton and Theo James.

The 2006 DVD topped the UK Music DVD Charts for 7 consecutive weeks and was seen for a year on Sky Arts TV, with the 2012 DVD also enjoying great success.

In 2019, Jeff Wayne’s The War of The Worlds: The Immersive Experience opened at London’s Old Metal Exchange, winning the THEA - the ‘Oscar’ of the interactive world and 2021’s prestigious Travellers Choice TripAdvisor Award.