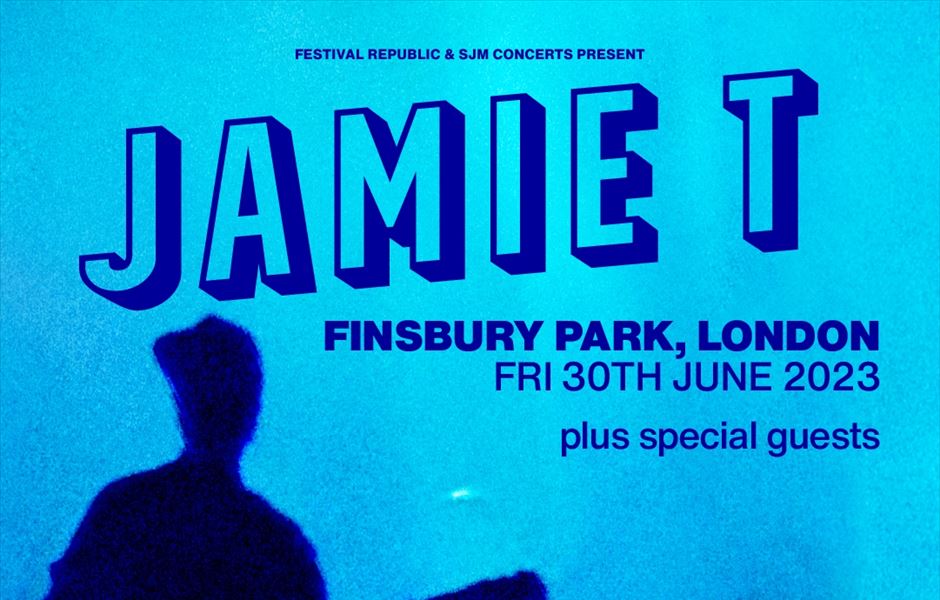 HUGE HOMECOMING SHOW WITH SPECIAL GUESTS TO BE ANNOUNCED

Festival Republic and SJM Concerts have today announced that acclaimed singer-songwriter Jamie T will play his biggest ever headline show at London’s Finsbury Park on Friday 30th June 2023. With special guests to be announced, the news comes off the back of Jamie T’s new number #1 album ‘The Theory of Whatever’ and as his seminal debut album ‘Panic Prevention’ marks its 15 year anniversary and achieves platinum status. With tickets for his 2022 UK headline tour flying out, and additional dates added as a result, Finsbury Park will be a truly special homecoming moment for the indie-rock troubadour and the hottest ticket in town next summer. Tickets go on general sale 0900AM Friday 05 August here.

The south Londoner returned to the stage in May after a 5-year hiatus, performing an intimate show at London’s Subterania, ahead of a triumphant headline performance at the John Peel stage at Glastonbury, his second bill-topping appearance in the tent. Last week Jamie released his critically acclaimed fifth studio album ‘The Theory of Whatever’ which has shot straight to number #1. Featuring already released singles ‘St George Wharf Tower’ and ‘The Old Style Raiders’, the record underlines Jamie T’s ongoing status as a vital force at the forefront of British alternative music. Jamie’s seminal debut record ‘Panic Prevention’ is also marking its 15 year anniversary, having recently achieved platinum status, with a limited edition vinyl release.

Finsbury Park will see a hero’s welcome for Jamie T following a major 2022 UK tour. The 11-date nationwide tour runs throughout November and includes a performance at London’s historic Alexandra Palace – which sold out in 20 minutes. Tickets for the Finsbury Park show go on pre-sale from 0900AM Weds 03 August, with general tickets on sale 0900AM Friday 05 August from www.ticketmaster.co.uk  and www.gigsandtours.com.