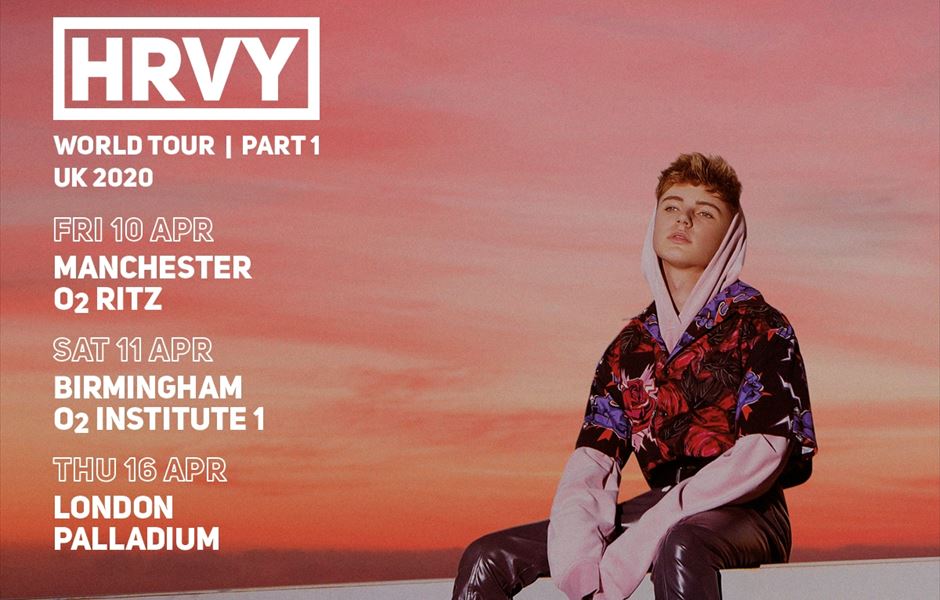 Fresh from the release of his new single 'Million Ways', HRVY today reveals the first batch of dates for his tour taking place in the USA, Germany, Amsterdam, Ireland and the UK throughout February, March and April 2020.

See the full dates below.

Tickets go on sale this Friday 22nd November at 9am, with a VIP Pre-Sale via the HRVY Pass App, Spotify Fan First Pre-Sale and Venue Pre-Sale taking place 9am Wednesday 20th November.

At just 20 years old, HRVY is already a global star. He has 4.5 million Instagram followers, over 2.3 million YouTube subscribers and 1 Billion combined streams to his name.

Named as one of 2019’s BBC Radio 1 Brit List artists (alongside Sam Fender & Jade Bird) following 2 years of sold out live shows, including a London Hammersmith Apollo show, trips to every corner of the Earth to meet and perform to new fans plus huge international and UK radio airplay singles and now BRIT certified Silver smash ’Personal’, which has amassed more than 550 million combined streams and over 11 further certifications globally including RIAA Gold in the USA.

For HRVY, 2019 has been another huge year, selling out shows in the UK, Europe, Korea, Malta and having visited the USA, China, Canada, South Korea, Mexico, Norway, Japan, Spain, Philippines, Finland, France, Netherlands, Holland, Sweden & Greece. He also released a stream of singles including ‘Told You So’ which amassed over 3 million combined streams in its first week, ‘Don’t Need Your Love’ with Korean boyband NCT Dream,  ‘I Miss Myself’ with NOTD and 'Younger' with Jonas Blue all of which have made HRVY one of the Top 500 artists in the world on Spotify.

HRVY just continues to grow not only on his socials but also with his music and in May, HRVY made his debut at BBC Radio 1's Big Weekend, received his first FOX Teen Choice Award nomination for Breakthrough artist and re-joined single collaborator Jonas Blue to perform to 80,000 people at Capital FM's Summertime Ball. Alongside all the travel, HRVY has also spent the year in writing sessions planning for 2020 and will again be the face of JD Sports 2019 Christmas campaign as it launches from the UK to a global level with HRVY at the fore.