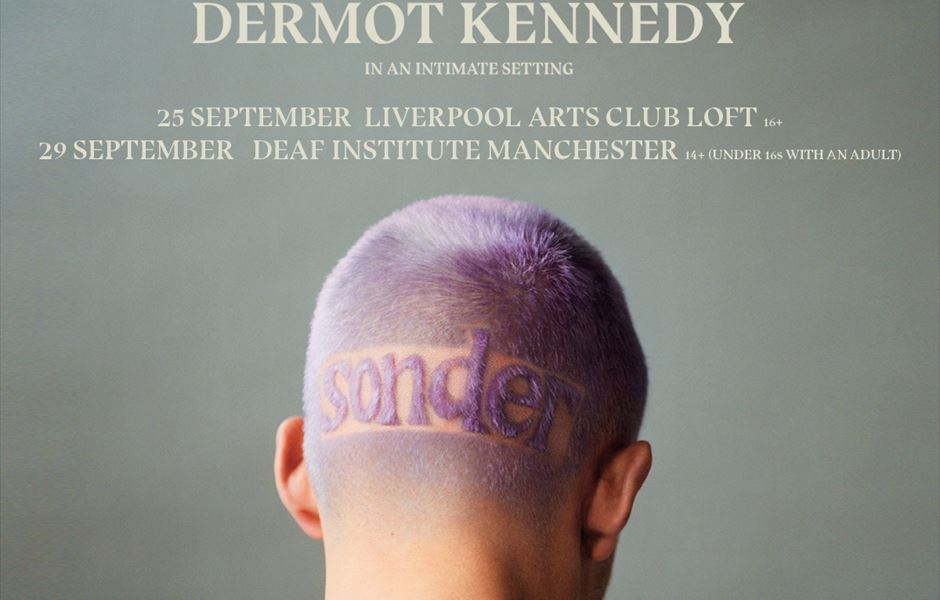 Dermot Kennedy has announced a short run of intimate acoustic shows across the UK in conjunction with Recordstore.co.uk, with tickets for the shows available when pre-ordering his brand new album ‘Sonder’, out September 23rd via Island Records/Interscope.

Starting September 25th in Glasgow (full routing below), Dermot kicks off a run of up close and personal shows across England and Scotland, playing songs from his new up-and-coming album ‘Sonder’ alongside fan favourites. To gain exclusive access to the tickets fans need to pre-order ‘Sonder’ from www.recordstore.co.uk/DermotKennedy before 12pm 16th August.

On the shows Dermot said; “I’m so so excited to announce these super intimate shows in the UK! These will be really unique, and something I might not do again for a long time, so get your tickets! Can’t wait to see you!”

In recent weeks alongside North American headline shows, Dermot has been performing the ‘Sonder Street Sessions’ across the US, Canada and Mexico - busking to thousands of fans in each city and raising funds for either national or local charities as well as The Shawn Mendes Foundation. Shows are announced the day before via Dermot’s socials along with a link for donating money to the chosen cause for that date.

Last month, alongside the announcement of ‘Sonder’, Dermot released album track ‘Dreamer’, a softer, piano-lead cut from the upcoming record that’s set to be a live favourite, and coming after lead single from the album 'Something to Someone’ which dropped in May to wide critical acclaim and has already topped over 30m streams across platforms.

On September 2nd Dermot will headline Ireland’s Electric Picnic Festival for his biggest festival headline performance to date to over 70,000 people. The set will top off a fantastic summer of huge shows across Ireland, cementing him as one the most successful Irish artists of recent years and a true superstar both at home and overseas.

Dermot, who was nominated for the ‘Best International Male’ BRIT Award in 2020, has now amassed nearly 4 billion streams across platforms and has the best-selling debut album in Ireland of this millennium. Without Fear, Dermot’s impassioned debut album has sold over 1.5 million copies worldwide to date, making him a platinum-selling artist in over 12 countries.  Notably, his singles, 'Outnumbered’, ‘Power Over Me’ and ‘Giants’ and his collaboration with Meduza on single 'Paradise’ have all now been certified Platinum, with ‘Paradise’ alone streaming over 550 million times. Tickets available over on gigsandtours.com