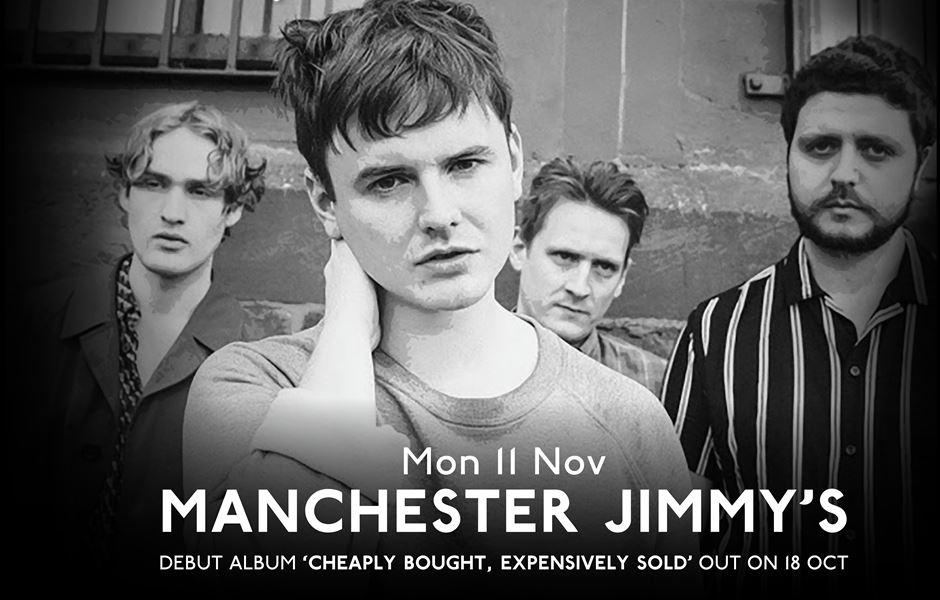 Along with his band The Decadent West, Declan Welsh uses music as a catalyst for hope and for change. They’re heading to Jimmy’s on Monday 11th November and tickets go on sale on August 9th, available from www.gigsandtours.com.

Finding your own unique point of view in an overwhelming, rowdy world takes time, patience and introspection. Being able to execute it in a way that feels authentic and distinctive is another battle entirely. Growing up in suburban East Kilbride and now based in Glasgow, Declan Welsh is a poet and songwriter that has managed to cement his individuality by putting humanity at the core of his socially aware comments.

Joined by Duncan McBride (Guitar), Ben Corlett (Bass) and Murray Noble (Drums), the band are known for their strong socialist views and performed in Palestine in 2016 as well as on Billy Bragg’s curated Leftfield Stage at Glastonbury. Releasing the All My Dreams Are Dull EP back in 2018, they built a strong following in the Scottish indie scene thanks to their anthems about toxic masculinity, rent increases, the rise of right-wing fascists and battling the intolerance that surrounds us. Now, debut album Cheaply Bought, Expensively Sold sees the four-piece build upon this raucous political fury, enforcing the idea that in today’s environment, we’re unable to ignore the atrocities forging our existential dread.

Welsh began writing songs on his acoustic guitar in his teens. Once Duncan, Ben and Murray came onboard, West wrote a bunch of new songs and pushed his native accent to the forefront of his output, delivering dexterous word play with tender sentimentality, contemplative resolution and confrontational gusto. While social issues are a central focus of this artistic expression, single ‘Absurd’ also asserts the need for self-reflection in the midst of these political issues. “Don't just say stuff to look like you have moral fibre,” he explains. “Forgive yourself for the fact we all have to exist, and try your best to self reflect and be a better artist and human being – not for yourself but because the world needs better artists and better human beings.”

Releasing a poetry pamphlet called 'If You Like That Sort Of Thing', Welsh often begins the band’s sets with spoken word poetry performance. Track ‘Do What You Want’ was also re-imagined as a spoken word piece for the Teatum Jones opening show at London Fashion week earlier this year. Nourishing Welsh’s talent as a wordsmith, the four-piece are able to transform these musings into indie-pop bangers that call back to the catchy hooks of the early 00s.

Recorded at 7west and produced by Glasgow staple Chris Marshall (Gerry Cinnamon, The Dunts, Van Ts, Baby Strange), the album affirms the message that politics are always personal. They’re tethered to our every day and whether it’s through music, social media or conversations with friends, this need for collective comfort and camaraderie is more important than ever.

Declan Welsh and The Decadent West are one of the most exciting bands around. Don’t miss them at Jimmy’s on Monday 11th November. Tickets go on sale on Friday 9th August, available from www.gigsandtours.com.