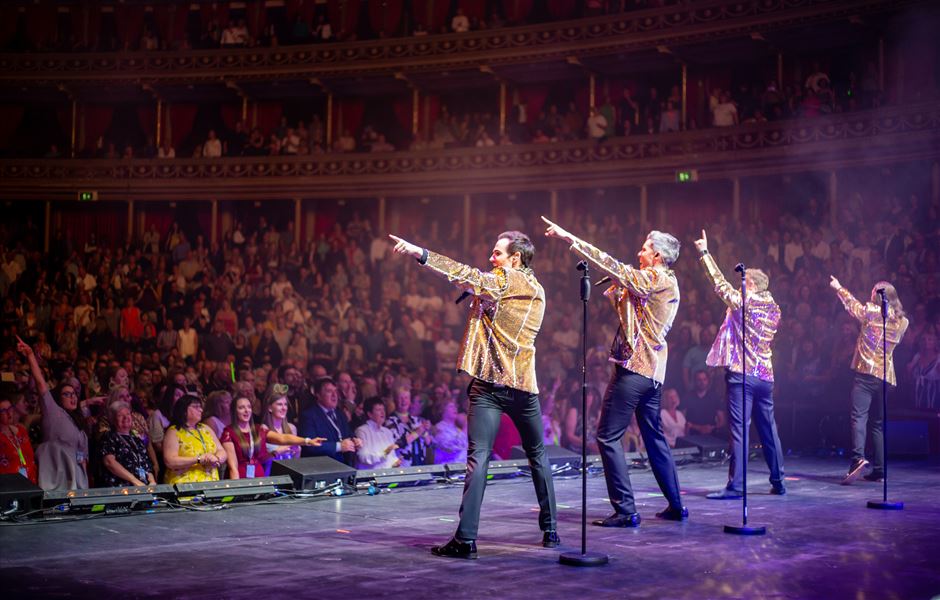 The World’s most successful musical theatre vocal group, COLLABRO, have announced their Greatest Hits tour for October and November 2021. Performing some their most memorable tracks including ‘Stars’, ‘Bring Him Home’, ‘Defying Gravity’ across the UK, the twenty-three-date run will kick off in Sheffield at City Hall on Saturday 9th October and will run until Saturday 6th November at Blackpool Opera House.  The band have also just released their first ever Christmas album ‘Christmas Is Here’.

The group - consisting of Michael Auger, Jamie Lambert, Matt Pagan and Thomas Redgrave - met for their first rehearsal above a pub in London Bridge back in 2014. Soon after they auditioned for ITV’s Britain’s Got Talent, and a month later received a full standing ovation from all four judges and the full audience at the Hammersmith Apollo. They went on to win the competition with one of the highest voting majorities of any series, and their debut album Stars went straight into the UK album charts at number one, was quickly certified gold, and became the fasting selling album of 2014.

After going from strength to strength with five top selling albums, four sell-out UK tours, two US tours, headline slots at the London Palladium, Wembley Stadium, the O2 arena and the Royal Albert Hall, COLLABRO have released their much anticipated Christmas album ‘Christmas Is Here’ as a self-release on their own label Peak Productions.

Christmas is such an important time for the boys as they are normally travelling so much, it gives them time to be with loved ones. With this year having been especially tough for so many, the boys hope to bring some happiness to their incredible fanbase this Christmas with this exciting new album release.

Christmas Is Here comprises of a range of festive classics, from ‘Winter Wonderland’ to ‘All I want for Christmas’, along with Christmas hymns we all know and love including ‘Silent Night’ and ‘O Holy Night’. Especially for this year, the boys have penned an original track, the titular ’Christmas Is Here’, teaming up with Ben Adams from A1 who also co-wrote Collabro’s first and only other original song, ‘Lighthouse’.

COLLABRO should currently be on their 5th headline UK tour with their latest album ‘LOVE LIKE THIS’ but due to the current pandemic, the tour has been rescheduled to 2021 which will see them perform all their greatest hits including ‘Shallow’, ‘I Dreamed A Dream’, ‘Memories’, ‘Who Wants To Live Forever’ and more. Original tickets remain valid. Full dates below:

Tickets are on sale now and available from www.gigsandtours.com / http://officialcollabro.com/