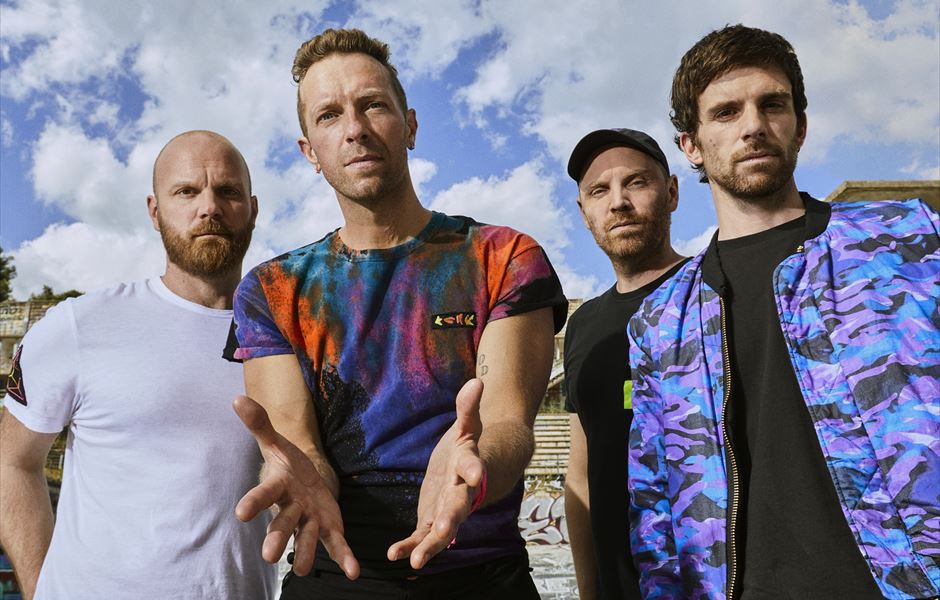 MUSIC OF THE SPHERES WORLD TOUR

TOUR AS SUSTAINABLE AND LOW-CARBON AS POSSIBLE

UK dates go on sale Friday, October 22 at 10am local time, with first access tickets for London and Glasgow shows available to those ordering Music Of The Spheres from Coldplay’s Official UK Store

On the eve of their new album, Music Of The Spheres, Coldplay have today announced an accompanying global stadium tour in 2022.

The Music Of The Spheres World Tour begins on 18 March 2022 with the band’s first ever show in Costa Rica, before travelling to the Dominican Republic, Mexico, USA, Germany, Poland, France, Belgium and the UK.

The full list of shows is available below and at coldplay.com/tour. Support at the majority of shows will come from H.E.R., with London Grammar supporting at selected dates.

Tickets for the UK dates will go on sale to the general public on October 22 at 10am local time at gigsandtours.com.

UK fans ordering Music Of The Spheres from the Official Coldplay UK Store at ukstore.coldplay.com (including all those who have already done so) will get first access to tickets for the London and Glasgow shows.

The band have already teased that more dates will follow soon.

SUSTAINABILITY PLAN ‘A WORK IN PROGRESS’

PLEDGE TO CUT TOUR EMISSIONS BY 50%

ONE TREE PLANTED FOR EVERY TICKET SOLD

In 2019, Coldplay committed to making their future tours as environmentally beneficial as possible, and today’s announcement is accompanied by a comprehensive set of sustainability initiatives and environmental commitments.

Full details can be seen at coldplay.com/sustainability, including commitments to:

- power the show entirely by renewable, super-low emission energy – with solar installations at every venue, waste cooking oil, a kinetic stadium floor and kinetic bikes powered by fans. This power will be stored in the first ever mobile, rechargeable show battery (developed and made in partnership with BMW from recyclable BMW i3 batteries).

-  draw down significantly more CO2 than the tour produces with a range of nature- and technology-based solutions, including planting one tree for every ticket sold.

- encourage fans to use low carbon transport to and from shows via the official tour app built by SAP, rewarding those who do with a discount at venues.

- ensure all merchandise is sustainably and ethically sourced.

-  offer free drinking water and strive to eliminate plastic bottles at every venue.

-  put 10% of all earnings into a fund for environmental and socially-conscious causes, including ClientEarth, One Tree Planted and The Ocean Cleanup.

“Playing live and finding connection with people is ultimately why we exist as a band. We’ve been planning this tour for years, and we’re super excited to play songs from across our whole time together.

At the same time, we’re very conscious that the planet is facing a climate crisis. So we’ve spent the last two years consulting with environmental experts to make this tour as sustainable as possible, and, just as importantly, to harness the tour’s potential to push things forward. We won’t get everything right, but we’re committed to doing everything we can and sharing what we learn. It’s a work in progress and we’re really grateful for the help we’ve had so far.

If you'd like to come to a show and sing with us, we’re so excited to see you.”

MUSIC OF THE SPHERES WORLD TOUR 2022