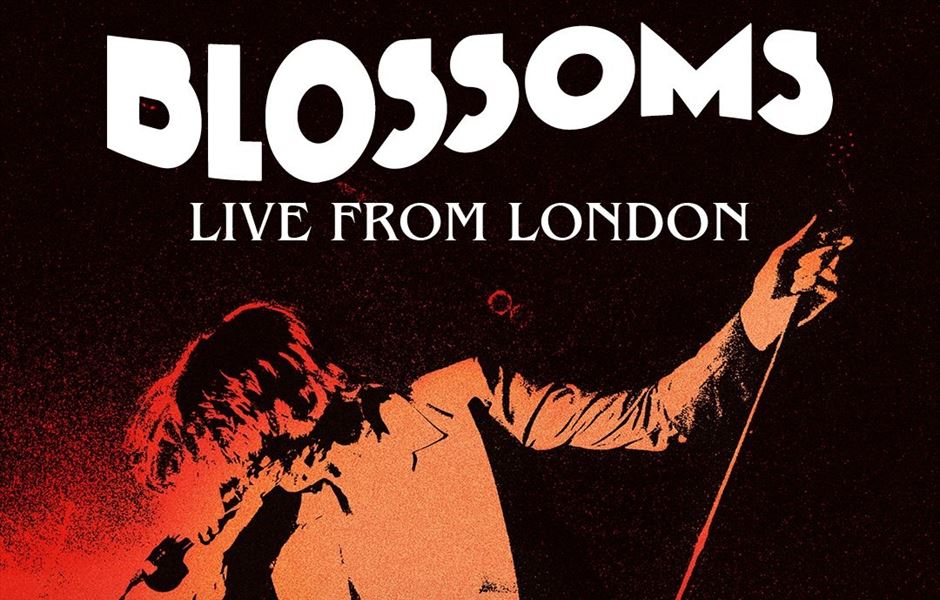 Blossoms are taking over O2 Academy Brixton for an exclusive gig streamed on MelodyVR on Thursday 3rd December at 8.30pm GMT.

The Stockport fivesome, whose hits include 'Charlemagne’, ‘I Can’t Stand It’ and ‘Your Girlfriend’, have gained a reputation as one of the decade’s hottest UK live acts and Blossoms Live From London represents a rare opportunity to catch their undeniable energy from home. The unmissable virtual show will be packed with the band’s indie pop hits performed on the hallowed Brixton stage.

This will be Blossoms first return to the iconic London venue since 2018, when they won a legion of new fans with their sold out Cool Like You UK tour. After a whirlwind few years, Blossoms have shown no signs of putting the brakes on in 2020 - releasing two new albums, January’s number 1 ‘Foolish Loving Spaces’ and the recent double album ‘In Isolation/Live From The Plaza Theatre, Stockport’, which charted at number 5 in the UK album chart, making the band the only act to have had two different albums in the Top 5 this year.

Blossoms recently released their first ever, double A-Side Christmas single, ‘Christmas Eve (Soul Purpose)’/, ‘It’s Going To Be A Cold Winter’, which was written on the hottest day of the year.

A global at-home audience can join the one-off show via the MelodyVR app on smartphones and VR headsets. Fans can take advantage of the latest livestream technology to virtually join the band on stage, choosing from multiple camera angles, and getting a 360° view of the action.

Frontman Tom Odgen says, “We’re really excited to be coming back to play live at O2 Academy Brixton and also making our MelodyVR debut. It’s been so long since we’ve played live and we can’t wait to perform for you all at home.”

Scoring a number one with their self-titled debut Blossoms, a number four with its follow up Cool Like You and another number one with their third album Foolish Loving Spaces, the band have dropped hints that a fourth studio release is on its way for 2021. Since their musical breakthrough in 2016, the band - consisting of singer Tom Ogden, bassist Charlie Salt, guitarist Josh Dewhurst, drummer Joe Donovan and Myles Kellock on keyboard - have evolved from being hotly tipped upstarts to one of the most beloved, respected acts on the circuit today.

Blossoms Live From London is exclusively available to watch on MelodyVR. To be part of the live experience, download the MelodyVR app at on.melodyvr.com/app or join the show online via the MelodyVR web player.

MelodyVR launched in 2018 with a simple mandate: not to replace the live music experience, but to harness the power of virtual reality to get people closer to the music they love.

By using VR technology, the founders realised that they could place fans in the crowd or on stage with their favourite musicians at live events. From epic stadium shows to intimate studio performances, the possibilities are endless: capacity restrictions are eliminated, music lovers can attend otherwise sold-out dates, and the barriers (distance, age, cost, access) that might keep people from experiencing their heroes live are swept away. The result? Artists can reach more fans than ever before, with a level of intimacy which has previously not been possible.

MelodyVR is the only licensed VR music platform and has the world’s largest library of exclusive immersive and interactive music experiences from the likes of Kesha, Post Malone, Lewis Capaldi, Cypress Hill, Blake Shelton, Mabel, Wiz Khalifa, Kelly Clarkson, The Chainsmokers and Panic! At the Disco.

Available on smartphones and VR headsets, the MelodyVR app can be downloaded at on.melodyvr.com/App