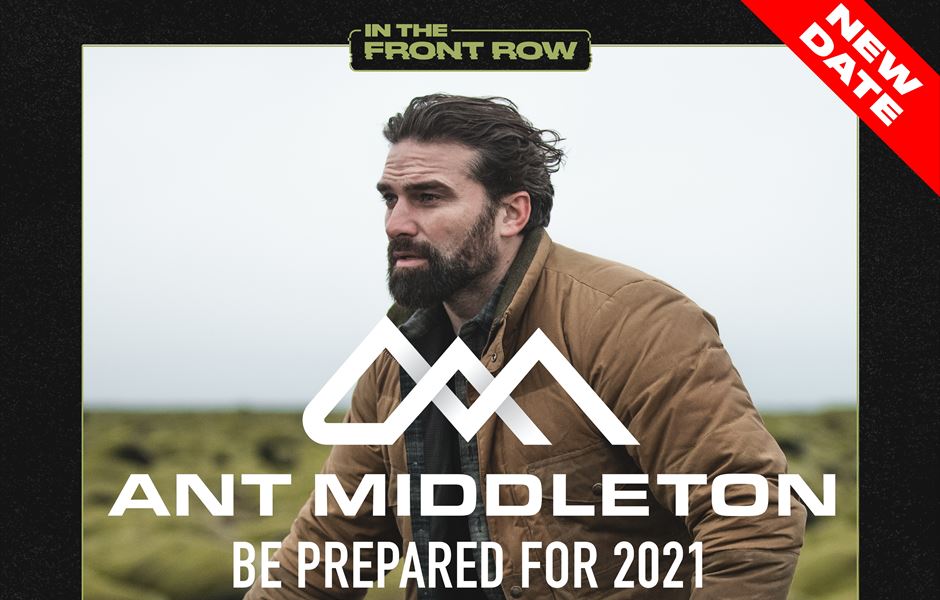 …because we’re hitting the ground running

Sunday Times Best Selling Author Ant Middleton has announced a live virtual talk for Monday 8th February 2021. Ant will be joined by very special guest host Ben Shephard, as they discuss how to rethink the roadblocks of 2020 into the endless possibilities of 2021. Unscripted and unfiltered with just honest conversation, Ant will be answering questions that can change your life. This is set to be a very special evening to help you kick start the New Year and make 2021 count! Tickets are on sale now and available from www.gigsandtours.com

Best known for his role as Chief Instructor on ‘SAS: Who Dares Wins’, Ant has become a much-loved master of adventure and endurance on and off-screen, spurred by his formidable career in the UK’s elite forces, including the Marines, 9 Parachute Squadron and SBS.

His appetite for adventure and extremes has no limit and has led him to take on some amazing challenges including fronting Channel 4’s show ‘Mutiny’ and survivalist programme Escape. In 2018 Ant conquered one of the biggest feats known to man, Mount Everest, in the Channel 4 hit Extreme Everest. Following the first series with Liam Payne, his most recent expedition sees him take Hollywood A-lister Rebel Wilson on a thrill-seeking road trip through Mexico to get to know the real Rebel, in the second series of the Sky One hit, Straight Talking, airing early next year.

Since 2017, Ant has regularly toured sold out venues in the UK with his live ‘Mind Over Muscle’ show and will be heading out on a huge UK tour in October/November 2021. Last year he ran ‘Mind Over Muscle Day Camps’ supporting individuals to realise their full potential.

Ant’s publishing has also reached record heights too. Ant’s first two books, First Man In and The Fear Bubble are both Sunday Times Best Sellers, earning him gold status at the Nielsen Awards. He released his latest non-fiction trilogy, Zero Negativity, earlier this Autumn which was also a Sunday Times Best Seller and his debut fiction thriller, Cold Justice, will be published next year.

Speaking about the new virtual talk, Ant said: ‘I think we can all agree 2020 has been a tough year for everyone. But we want to leave the hardship and struggles behind us and look forward to a positive and brighter 2021. That’s why I am creating a live virtual talk to prepare you for the year ahead so we can all hit the ground running, together. I will be with a very good friend of mine, Ben Shephard, and we would love to hear from everyone that wants to attack 2021 with a different way of thinking and a positive mindset. So, get your tickets and see you live on the 18th of Jan!’

Joining Ant will be one Britain’s most popular television presenters Ben Shepard. Ben is passionate about people - their lives, their stories and their challenges. With a genuine warmth and ability to bring out the best in others. He currently co-anchors ITV's breakfast show Good Morning Britain, as well as hosting the ever-popular quiz show Tipping Point. No stranger to the corporate arena as a consultant, host and brand ambassador, Ben has taken the helm of events such as The British Olympic Association Ball, Sony Global Conference, the BAFTAs, The Duke of Edinburgh’s DofE Awards Annual Dinner, RFU World Cup Dinner and FA Club to name but a few.