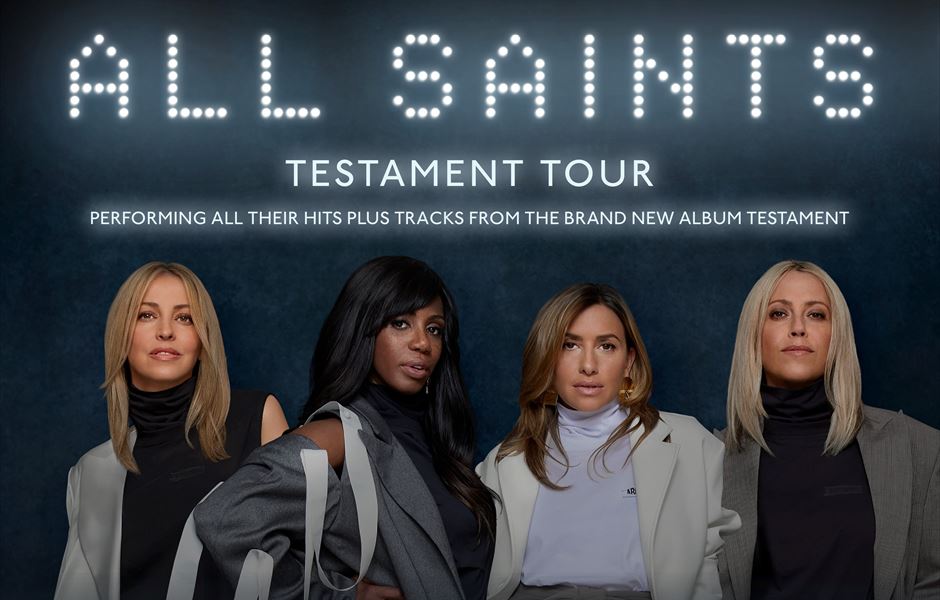 To celebrate the release of their already critically acclaimed fifth album 'Testament. this Friday, All Saints have announced a major UK tour this winter performing all their hits and brand new tracks.

All Saints have to date sold over 12million records, had five No.1 singles, 4 hit albums and won two BRIT awards. After a 10 year hiatus, All Saints returned in 2016 with the hugely successful album 'Red Flag', which reached No.3 in the Official UK Albums Chart.

Post album release, the band embarked on a sold out tour of the UK, before a summer of festival appearances in 2017. All Saints also played to over half a million people, as special guests to Take That on their arena tour of the UK.

All Saints new album Testament sees them team up once again with producer William Orbit, the force behind ‘Pure Shores’ and ‘Black Coffee’ and long-time collaborator Karl 'KGee' Gordon.

The album has so far received rapturous acclaim from the likes from The Sunday Times (Album of the Week) to The Independent "This feels like a band coming full circle with frequent nods to the past, yet with a steadfast determination to evolve”  and the Metro who said "Testament is fluid, heady, thoughtful, deep in atmosphere and light in execution. An album you can sink into and swim through."

All Saints new 2018 tour follows their sold out intimate show at Electric Brixton earlier this month.  The new album and tickets go on sale Friday 27 July at 9am via:[INCOMPATIBLE CHARACTER]www.gigsandtours.com / www.ticketmaster.co.uk