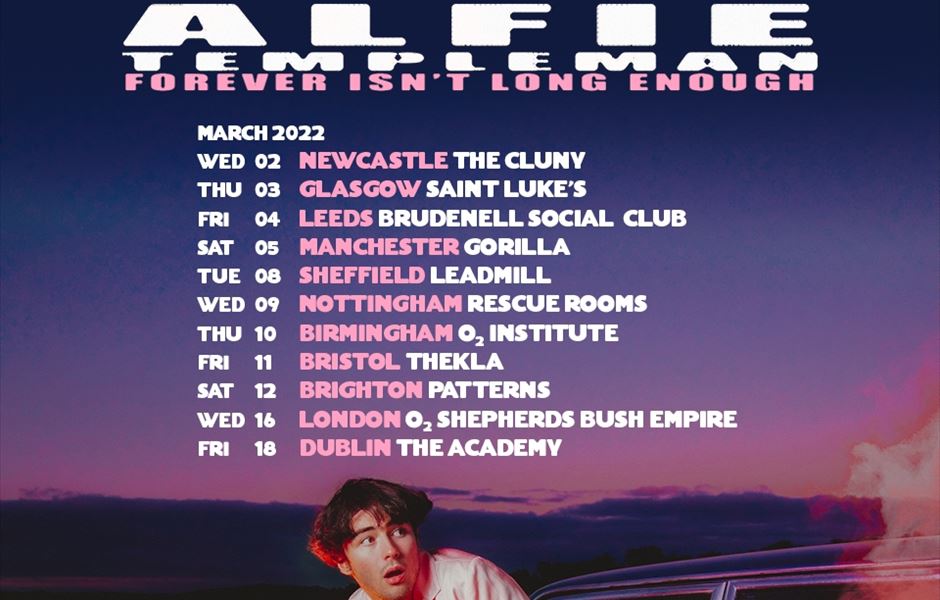 18 year old rising star Alfie Templeman has today shared details of a Spring 2022 headline tour - including his biggest show to date at the O2 Shepherds Bush Empire on Mar 16.

It follows the recent announcement of mini-album Forever Isn’t Long Enough, which serves as Templeman’s final and most substantial body of work before recording starts on his debut album proper, and is available for pre-order HERE.

“It was a real bummer having to cancel so many sold-out shows last year and the start of this year  but now things are looking more hopeful and positive I’m extremely excited to announce that we’re playing our biggest shows yet in the spring of 2022. It’s going to be really magical being together and celebrating with music, so grab a ticket and I’ll see you at a show! Alf x “

Premiering as his fourth consecutive Hottest Record In The World with Annie Mac on BBC Radio 1, current single ‘Everybody’s Gonna Love Somebody’ is Alfie Templeman’s first single since riotous bop ‘Forever Isn’t Long Enough’ arrived back in September 2020. ‘Everybody’s Gonna Love Somebody’ has received glowing praise across the board from the likes of NME, The Sunday Times, Notion, The Independent, DIY, Dork, CLASH, The Line Of Best Fit, and more while garnering support from Annie Mac, Jack Saunders, Jess Iszatt, Clara Amfo, Nick Grimshaw, Gemma Bradley, and Jordan North at BBC Radio 1,  Jo Whiley at BBC Radio 2, Chris Hawkins at BBC Radio 6 Music, and is playlisted at Absolute Radio 20s and Amazing Radio.

Speaking about the Forever Isn’t Long Enough mini-album, Templeman added: “I wanted to make a refined and focused pop record – something more widescreen than an EP but more concise than a full-length album -with a feel somewhere between Fleetwood Mac’s Rumours and Tame Impala’s Currents. In making Forever Isn’t Long Enough I realised that I needed to slow down a little and work on things carefully. The songs took anywhere from one day to 4 months to 2 years to finish for this record, but I made sure each one was perfect and I’ve never been more proud of how they all came out.”

Previous EP Happiness In Liquid Form followed Templeman’s trio of rapturously received EP’s - 2018’s Like An Animal, and 2019’s Sunday Morning Cereal and Don’t Go Wasting Time - in introducing the world to a prodigiously talented young musician, songwriter, producer and performer. The Bedfordshire-born teen, self-taught on 10 different instruments, has enjoyed a meteoric rise and cemented his place as one of UK indie’s brightest lights with swathes of support from Absolute ‘20s, BBC Radio 1 (amassing over 200 plays at the station), BBC Radio 2, BBC Radio 6 Music, Apple Music 1, Radio X, Virgin, and more. The title track from the acclaimed Happiness In Liquid Form EP and subsequent single ‘Obvious Guy’ received strong support from BBC Radio 1 DJs such as Annie Mac and Jack Saunders, culminating in two consecutive C-List playlistings at the station, closely followed by a B-List addition for ‘Forever Isn’t Long Enough’, which was also Greg James’ Tune Of The Week. ‘Forever Isn’t Long Enough’ was also daytime playlisted by Radio X (after being made Record Of The Week), Virgin and Absolute ‘20s.

With an impressive 105k Instagram followers since his first post in 2019, over 1 million monthly Spotify listeners, and a cumulative streaming figure of over 60 million,  Alfie Templeman has come a long way since the release of debut track ‘Like An Animal’. At one point in 2020, Templeman  had three songs in the Music Moves Europe Talent Chart Top 20; was featured as the cover star of Dork Magazine; was included in the FIFA 21 soundtrack; in February, was H&M Artist of the Month in the UK, with accompanying store visuals and playlist support. Templeman was previously handpicked by Apple from a global shortlist of rising artists to front their #shotoniphone campaign and was chosen by YouTube Music to be a worldwide ‘Foundry Artist’ in 2020, following in the footsteps of artists such as Dua Lipa and Rosalia, featuring on 90 foot billboards in Times Square in NYC and Central LA.