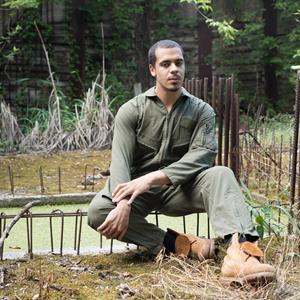 John FM
All John FM performances
At the close of another long, hot summer of racial reckoning in America, DJ and producer John FM surfaced with a sober collection of songs entitled American Spiritthat trace the last five years of his personal and musical journey. John FM describes the album's minimalist photoshopped album art of an outline of a black music note superimposed over a white backdrop as an act of infiltration.

The century spanning history of racial segregation and tension is palpable in American Spirits,represented in the form of loose and lucid parables that decode the surreality of everyday American violence. Having lived in and around the city of Detroit for most of his life, John FM's songs bridge a structural gap in the city's musical history that extends from the gospel and early rhythm and blues of Joe Von Battle's establishment of the ?Detroit Sound? in the 1950s, which was disrupted by the enhanced overdubs of Barry Gordy's Motown Soul in the 1960s to the DIY progressive electronic experiments that would become Detroit techno from 1973-1985.

This event is for 18 and over - No refunds will be issued for under 18s.