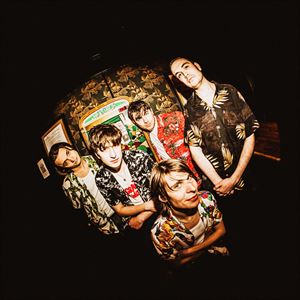 Please note the booking fee for this event includes a Venue Levy of £0.30 which is charged by the venue

14+ only. 14s to 15s must be accompanied by an adult. No refunds will be given for incorrectly booked tickets.

It’s time for the marauding performance punks from the slopes of the Pennines to travel the UK once more, as CABBAGE announce tour dates for May 2021, stomping across stages in belated support of their upcoming, second album, Amanita Pantherina. In their first live outings since performing on the cusp of UK lockdown in early March for Annie Mac Presents in London, the 13-date heady trip sees the band let loose from Glasgow to Brighton.

Tickets go on general sale from 9am on Friday 25 September 2020.

Fighting fear of silence with two statement singles in the form of the Coronation Street-inspired, YOU’VE MADE AN ARTFORM (FROM FALLING TO PIECES) and the multicoloured, Shaun Ryder-indebted splash of GET OUTTA MY BRAIN, the re-energised five-piece strike out with a fresh sense of optimism on Amanita Pantherina, out on Fri 25 September 2020, promising 11-tracks of crackling, amped-up, socially-conscious and literary punk-pop.

Featuring a glorious homecoming to Manchester’s Gorilla, recently rescued from closure, and a return to Lafayette in London, the full list of dates for Cabbage’s Amanita Pantherina 2021 Tour are as follows:

Older and wiser, yet unchanged in their mission, Cabbage – made up of Lee Broadbent (vocals), Joe Martin (vocals/guitar), Eoghan Clifford (guitar), Paddy Neville (bass) and Asa Morley (drums) – present Amanita Pantherina as the first album entirely self-produced and recorded in their own Brassica Studios, Mossley. Long-term, technical collaborator, Chris Stockton was on hand for the album sessions to ensure the buttons got pressed.

Having deftly documented the turbulent times of modern Britain since 2017, machine-gunning wry takes on the banal, absurd and cruel – from the Brexit non-anthem of Raus! to the prescient, pharmaceutically-orientated, Medicine - the band aims to remain a vital voice of the times in which we live.

Since forming in late-2015, Cabbage have occupied provocative territory by promoting progressive politics and supporting charitable causes through their live shows, leading them to be featured the BBC Radio Four documentary ‘The Art of Now: Band Politics’. At the same time as headlining sell-out UK tours, the band played Edgeley Park with Blossoms in 2019 and launched their debut album with a one-off, specially-curated exhibition at Manchester Art Gallery.

Connect with Cabbage on social media at www.facebook.com/cabbagelechou and www.twitter.com/ahcabbage